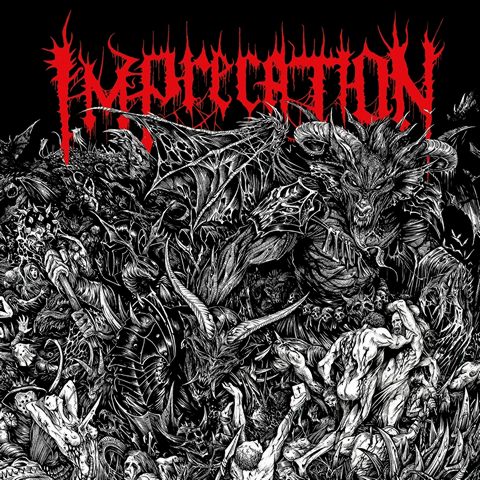 Officially back since 10 years, the 1991 formed Imprecation are undoubtly one of the better known acts in the underground, having gained a cult status with their signature Black/Death brand with occasional uses of atmospheric keyboard sounds, and a now legendary compilation “Theurgia Goetia Summa” from 1995 compiling the two demos “Ceremony Of The Nine Angles”, “promo 94” and the EP “Sigil of Baphomet”. After the resurrection in 2009 the band released a demo (“Jehova Denied”), an EP (“Sigil of Lucifer”), the debut album “Satanae Tenebris Infinita”, as well as the split with Blaspherian. Now 5 years after the last offering and 6 years after the debut, Imprecation really nailed it with their second album “Damnatio ad Bestias”.

The production is improved, which means to me: less higher, more lows compared to the debut. The overall mix is perfect as the atmosphere is dark, evil, and ancient malefic from deep down below and the songs are killer, well written, with enough changes and variations to keep the listen enjoyable (or terrifying If you wish) and actually quite engaging and enchanting with moments that remain stuck in my mind…memorable things indeed. Nice guitartone, deep balls-shaking bass and very natural sounding drums that still can be powerful like A-bombs and the best vocal performance by Dave Herrera. The songs vary between doooooommm, mid tempo panzer division groove machines and blasting minigun sections purifying the earth from religious sheep. What impresses me is the fact that it remains memorable, dark obscure (a certain old Morbid Angel feel can`t be ignored) and brutal at the same time without being boring after more than 10 listens.

The album remains strong until the end, having some of the best material at the end, so I recommend to listen to the whole fukking album. Fantastic return of the ancient black metal of death the American way! (DPF)