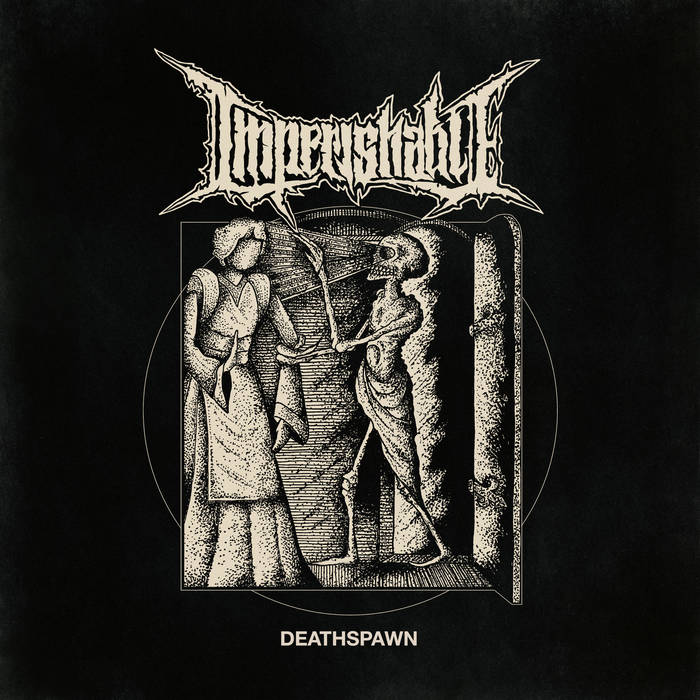 Recently, I reviewed a compilation by a forgotten band from the Swedish Death Metal scene. In doing so, I argued that we still reap all the tasty fruits of the outburst of the Swedish Boss HM-2 sound of the early 90’s almost daily. Not everything is equally successful, of course, and there have also been many bands in recent years that did have the distinctive sound, but played very much on safe and just lacked the spark to be really good and convincing. And, lots of bands who started out with a very good demo, EP or debut album kind of lost that spark along the way. None of that is the case with Imperishable, this is a band that plays this style with verve and upholds the honour of the Swedish Old School Death Metal genre.

‘Deathspawn’ is a demo from last year, but I only recently got to see it, or rather, hear it. A pity, because I wouldn’t have minded hearing this earlier. The deluge of Old School (Swedish) Death Metal that has plagued our senses since about 2010 has lost much of its, initially very catching, impact. However, there are bands like Imperishable that can still bring the same fire as many of the bands from that initial burst of new Old School bands, or even from the first-generation of bands of the early 90’s.

In Imperishable’s line-up, we find a lot of familiar faces, including the Vampire brothers Holmberg and vocalist Henke Skoog from Nominon. These three also know each other from the days when they were in Inverted Cross together. Finally, Christopher Hjelte, formerly of Dr. Living Death, has also been recruited as second guitarist. No wonder it sounds this good, it is clear that these are no beginners.

The music of this first demo is also very similar to their earlier/other musical adventures. The basis is a firm stomp of Swedish Death Metal that Dismember has been a model for. Dismember has always had a lot of room for melodies and almost Heavy Metal-like lead work, which is what we hear here as well. That insertion of leads and solos makes us also recognise influences from bands like Liers In Wait and its predecessor, Grotesque, in the songs. However, the whole thing comes sufficiently riff-heavy and with plenty of chugging guitar work to get the real fan of Swedish Death Metal, or Old School Death Metal in general, going. Vampire started out quite raw and raucous with their first and self-titled demo/7″ but, as time went on, they wove more and more Heavy Metal elements into the music, Hardrock even. That musical ability and skill is well reflected in these four tracks, with a total playing time of just under 15 minutes. It is therefore clear that Imperishable does not choose the simple variant of Swedish Death Metal, although there is nothing wrong with a tasty Grave or Unleashed record at times, these four gentlemen are of a higher musical level and bring that to the table. In that respect, it is similar to Necrovation, for instance, a band that can be seen as one of the igniters of the new wave of old school death metal. They also brought the authentic sound, but also made sure it sounded exciting and fresh, mostly because of their drive for writing good songs. That skill set is what I also recognize in Imperishable. The input of vocalist Henke Skoog should not go unmentioned either. Although I was very attached to Daniel Garptoft at the time and was initially a bit sceptical about him being replaced by Henke in Nominon, I was immediately sold on the first encounter with Henke at a concert. He brought so much more energy to the band than Daniel ever did – of course with all due respect to Daniel, whose vocal work I still adore. Henke was like a rabid dog on stage and I can hear that same wild intensity in these demo tracks now. Also, his ferocious vocals provide a good counterpoint to the more melodic pieces. Basically, this all is executed in near perfection when it comes to musical skills, song writing and overall sound.

Needless to say, this really is a must-hear for anyone who likes Dismember and Entombed. It is a mystery to me that Imperishable has not yet been picked up and this demo is only available digitally. It is a strange world we live in after all, when I see how many bands release EP’s and albums whose level is far more questionable than the excellent musicianship of these four gentlemen. So, do yourself a favour and check Imperishable via Bandcamp or Spotify. It will make your day as good as mine.