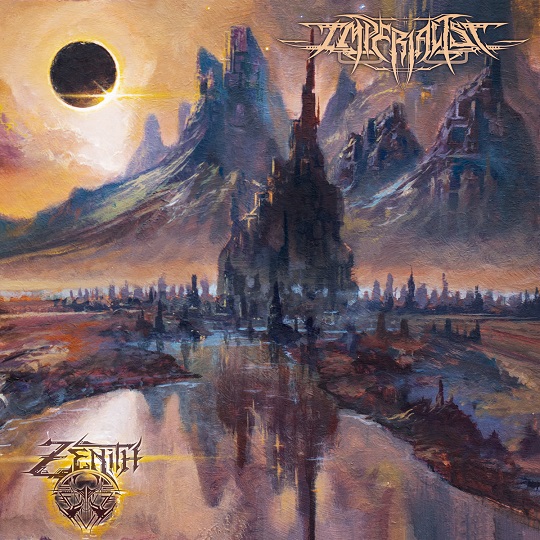 A painter can express the world upon a canvas with a myriad of emotions  swirling within his mind, the end result can be an exquisite work of art, where the lines are seamless and the brush strokes conform neatly to every flick of the wrist, sometimes a picturesque monument bestowed upon the creator can just be that…nothing more but a shallow beauty, devoid of emotions, but sometimes there exist art that feels like life was drawn from the breath of the wind and placed within the ink as you the audience can feel its depth and aura just by drinking the sights upon new eyes. This in my opinion is where any work of art truly is immortalized within the confinements of one’s perception where they may be able to draw upon any emotions, negative or positive. This is what Imperialist accomplishes with their second full length album, ‘Zenith’, that will be unveiled on November 26th through Transcending Obscurity Records.

If you are not familiar with Imperialist they are a US Black Metal band formed in 2013, they are known for fusing the elements of sci-fi themes, progressive and atmospheric elements into their own branded DNA creating a unique entity that at times feels like a cinematic journey. Now this review can venture into different directions, with me examining certain tracks and elements and then tying it back into the overall body which is this album, but first I would just like to address the album as a whole, as from my listening experience, all 7 tracks even though they possess a plethora of talent, it would be an injustice to separate them from this integral being.

‘Zenith’ evokes the illusion of a fantasy realm where there exists a central character whether noble or despotic in nature who seeks to forge his own world, the dominion in which he is revered as the true celestial being, the creation process is where each track prospers as each song stands as the pillars which hoists this world upon its titan-like weight. One of the standout moments here presents itself with the voice that fashions this universe of sound, a harsh Black Metal register is used that at times feels similar to the vox of Ihsahn, but the beauty that unveils itself upon this album is the flow of the vocal delivery, where the lines snake and undulate like towering hills that stand majestic surveying a vast land, so too does the vocals feel as it evokes a sorcerer-like mystique towards the verses spewed forth. ‘The Maw’ and ‘He Who Mastered Shapes’ are songs which demonstrates the virtuosity upon ‘Zenith’, as the positive aspects are illuminated here, yes, the vocals are harsh, but what is appreciated is that it’s not harsh because the album requires it to be (if that makes sense to the reader) no, just like the winds that howl as it rushes past the peaks of mountains so too does the vocal expel it terms of its organic effect, as though it as an element of nature itself.

If the voice on Zenith were the spells that command forth the earth to shift and contort its planes towards the structures that are desired, then the strings and percussions would be the essence that is the sound of the winds and waters as it flows through the unsullied creation. ‘Terminal Odyssey’ and ‘Beyond the Celestial Veil’ are tracks which showcases the musical prowess that the album gifts towards the listener, as it takes the traditional Black Metal tremolo riffing coupled with the thunderous drumming and molds it to reflect the atmospheric soul that has been summoned forth in ‘Zenith’. There are progressive moments and some intricacies with the playing, but again, like the waters that courses through the rocks in a river, so too do the musical elements mimic with its organic substance. A large portion of these aspects are to be owed towards the production utilized here, as it’s not completely raw yet it is not the most refined, the midpoint achieved here suits the album perfectly as it gives another breath of life to each variable making each one discernable, yet binding them into a singular body which produces a cohesive sound.

Overall this is a fantastic album, that offers a world for us the listener to explore, as we bear witness to a creation sculpted with that of sound, at different points in the album, it also feels as though you have a bird’s eye view, like you are witnessing this wonder unfold as the verses flow forth and it’s because of these transcendental moments that is offered in ‘Zenith’ that makes it rather unique and memorable. (Justin Joseph)