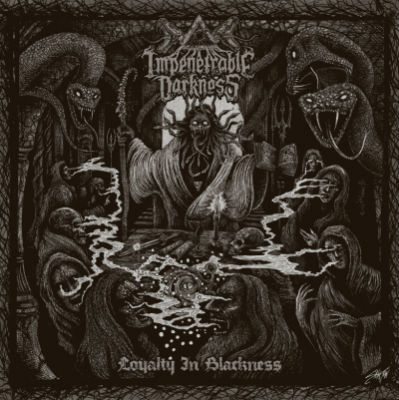 When you are from Greece and you decide to walk to path of the dark and occult, you can either choose the path of the old Hellenic sound, once made majestic by Thou Art Lord, Varathron, Rotting Christ and Necromantia…to name a few. Or you choose a path your own, drawing influences from other scenes. Impenetrable Darkness have choses the latter one. Formed back in 2011 and have released a demo in 2012 with the same title as their debut, “Loyalty in Blackness” was released by Black Saw Records in 2014. The very same debut Morbid Chapel Records picked up for a rerelease. Impenetrable Darkness also seemed to have recorded an EP called “Cosmic Termination”, which shall be released soon according to the band.

So no typical Hellenic Black Metal, but what kind of Blackened Art do they practice? It’s quite clear Watain is oozing through wounds, with slight hints of Dissection’s “The Somberlain” during the more mellow parts and leads. Also some slight Ondskapt during their “Dödens Evangelium” and “Arisen from the Ashes” album can be heard in the songwriting for a bit. The production is more thin than bombastic to use a term, but it suits the recording very well especially how the vocals are recorded, as it sounds a bit hazy with some reverb on it. It gives the occult touch which the album needs. At the end, “Loyalty In Blackness” is not a cutting-edge album but certainly a more than decent one and certainly enjoyable if a band like Watain is on your playlist more than once a week. (Ricardo)