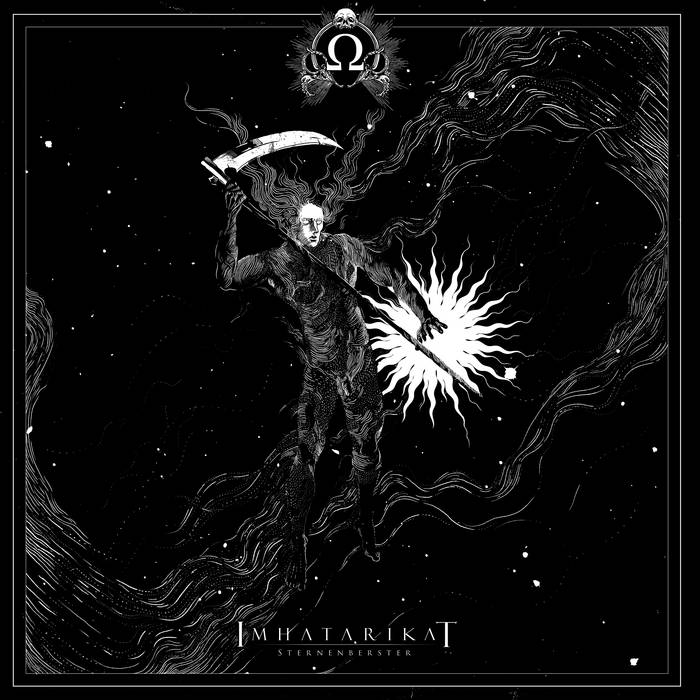 Although the 2017 ‘Kenoboros’ 12″ EP on Terratur Possessions was well received amongst the followers of the flourishing Black Metal scene, I always kept the feeling that with this EP Imha Tarikat never really gotten the attention and recognition it deserved. The release of the bands’ 2019 debut album, ‘Kara Ihlas’ for Vendetta Records didn’t really change that. Its successor is this ‘Sternenberster’, which saw the light of day through Lupus Lounge and Prophecy Productions in August 2020.

As with its previous releases, it is mainly Imha Tarikat-mainman Ruhsuz Cellât who is responsible for all the dark and twisted violence on this record, and, as with the previous recordings, he again changed drummers for this ‘Sternenberster’. Whether switching labels and drummers was a conscious choice in Imha Tarikat’s career is not clear. What is clear is that Ruhsuz Cellât is pushing Imha Tarikat’s boundaries with each record and demonstrating a more mature sound. On ‘Kenoboros’ we mainly heard a wild Black Metal storm full of potential and with a muddy dark production. The difference with ‘Sternenberster’ is quite big, although the musical marks are still clearly recognizable. On this record Ruhsuz Cellât has clearly become a better musician and that results in swirling storms of ideas. The ferocity of ‘Kenoboros’ does still come back in the vocals, Ruhsuz Cellât sounds as possessed and frustrated as ever. The music, however, is much more dynamic and varied, the intricate Black Metal riffs still prevail, but the anger and aggression – although still pretty much omnipresent – have occasionally made room for some more melody and tempo reduction. Just listen for example to the rocking Heavy Metal-esque climax in ‘Klimax Downpour’ and in ‘Sturm Der Erlösung’, ‘Kreuzpunkt Der Schicksale’ or ‘Aufstieg’ there are audible Iron Maiden influences. This stands in strong contrast to the otherwise considerably complex structures and unconventional way of song writing, but with the clear production it still seems to fuse together to a natural, yet uncomfortable whole.

Fans of the previous work need not fear that the band has moved too far away from its roots, however; this is still as black as coal, a record full of blast beats and caveman-like vocals. However, Ruhsuz Cellât is clearly widening his gaze and realizing his musical visions – call it maturing, if you will. This however also fits perfectly in the current German Black Metal scene, where bands like Ascension, Shrine Of Insanabilis and Dysangelium are following similar paths. Long story cut short: Imha Tarikat guarantees a challenging but rewarding listen. (FelixS)