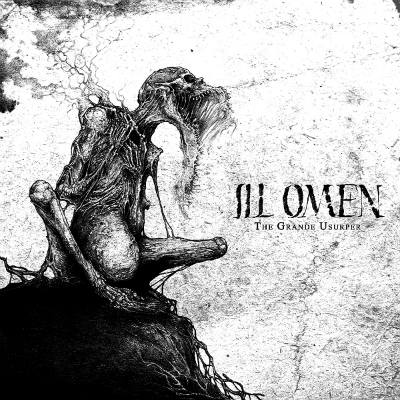 A while ago, while taking one of my early morning comutes with public transport I had to use my ear buds instead of my usual headphones. As I was dozing off, the guy in a suit, who had been sitting next to me was getting more and more nervous, until he finally blurted out: ‘I think the train broke!’ I woke up, looked around, noticed one of the buds fell out of my ear, put it back and tried to stay awake for the rest of the commute. While leaving (trying to leave the train in the morning rush), he walked up to me and told me I should never be allowed to listen to the music I had been listening to, because it gave the appearance e of the train breaking down. I was playing Ill Omen with (at that point newly released) “The Grande Usurper”.

Australian project Ill Omen consists of a sole member who goes by moniker IV (to some of you, he already became familiar with some of his other work, like Austere and Funeral Mourning) and this is the 16th release under this name. Compared to his previous release (“Ae. Thy. Rift.” from 2016) which was criticised because it demanded a very special suicidal mood from the listener, this EP is much more straight forward, frost-bitten Black Metal that contains several war metal moments combined with some dark melodies, chaotic solos and even some blast beats. The EP is dense to the point of being suffocating. It combines all the best things black metal has to offer.

Still, I’d like to point out, because I know a lot of people who have heard this record reacted badly to it. If you believe a song needs a certain determined structure, you’re going to be disappointed. Those times are through, clear song structures are a thing of the past or at least, they are not needed here. Think of this the next time you’re trying to get your thoughts in order. This is how they sound like, don’t they? (Black Mary)