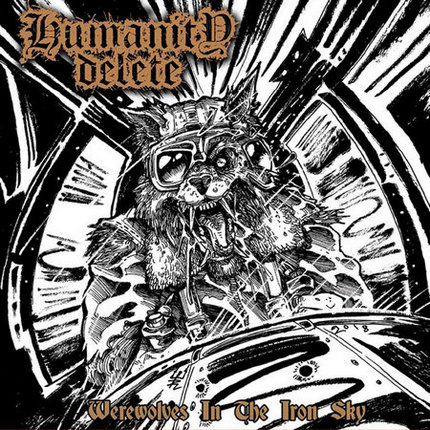 Does anyone keep count on how many projects has the ever prolific Rogga Johansson? Me neither. Anyway hails to the man for releasing so much stuff with so many different musicians (Kam Lee, Dave Ingram, Paul Speckman…), the guy obviously has tons of talent. Humanity Delete is one of Rogga’s projects where he does everything by himself and “Werewolves In The Iron Sky” is already his third record.

I was glad to see the cover artwork of a werewold in a plane’s cabin and probably that made my expectations rise too high because the musical content doesn’t convince me at all. All tracks have similar tempo, all of them have also similar guitar riffing. Rogga’s vocals are not the deep growls that I know from some of his other projects, his voice here is higher and not that pleasant for the ears. Honestly said, nothing in particular stands out in this album and it becomes quite boring after a while because there is nothing really interesting going on among the wolves in the iron sky.

The album has its moments here and there but as a whole this is one of the weakest Rogga projects I’ve ever come upon….but hear it for yourself! (Zvetan)