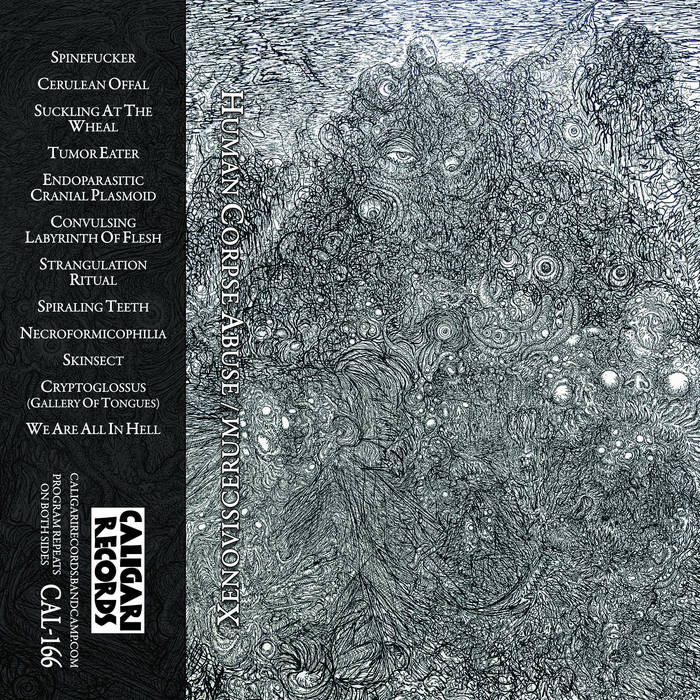 Human Corpse Abuse is a new band hailing from, as they say themselves, the stinking swamps of Virginia, USA. However, you can’t exactly call this duo inexperienced: both the six and the four-stringed guitars and vocals are handled by Shelby Lermo (Vastum) and on drums we find Grindcore veteran Adam Jarvis (Pig Destroyer, Lock Up, Misery Index and Hate Eternal). You can probably already imagine what it sounds like when these two clash heads.

Well, exactly – like Human Corpse Abuse. A serving of Old School Death Metal laced by unrelenting Grindcore with a penchant for Goregrind and fast-paced D-Beat. Everything nicely wrapped up in a downright Fuck You-Punk-attitude. With a few exceptions, none of the songs get past the 90-second mark. With this, the twosome keeps the momentum going nicely. Shelby gives a clinic in a good use of different vocals: (I think) pitch-shifted vocals, grunts and screams – you get it all. The smooth, energetic and spontaneous nature of the music works just fine, delivering a dozen bangers drenched in wild and blubbery production. It really sounds like you are in this band’s rehearsal room – wiping the the blood from your ears. Although there is no way to claim that we are dealing with something new or earth-shattering here, it is the passion of these two boneheads that does it; with ‘Xenoviscerum’, the band delivers a successful debut.