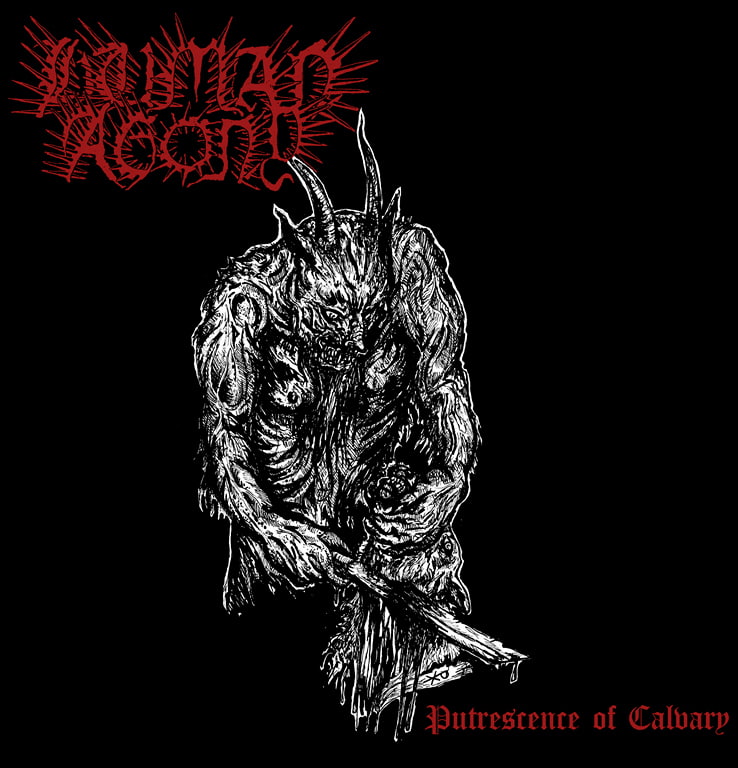 Judging by the internet, Canadians are one of the nicest people in the world. Just a simple glimpse into certain parts of their music scene will quickly try to convince otherwise. Towards the end of 2019 the brutal rooster of Canadian extreme underground scene, which includes bands like Blasphemy, Revenge and Conqueror (to mention only the very tip of the enormous ice berg of similar acts and bands which have spawned out of these) was joined by Human Agony.

Human Agony (as their name suggests) play a particularly bestial blend of Black and Death metal and have been active since 2016. “Putrescence of Cavalry” is their debut full length, which actually followed two demos, two splits (first with the harsh noise musician Striations, who actually created the unsettling ‘Introduction’ on the full length, and the second one with the chaotic counterparts Methgoat. Both were published in 2018 on cassettes and in a very limited pressing) and an EP (also from 2018).

As stated before, the harsh noise “Introduction” kicks off the album and, like that wasn’t enough, things quickly escalate from there. Sheer sadism transformed into instrumental work is mixed with demonic vocals and the combination of both will give you the feeling you have left the place where music is something to listen to. It has transformed into a powerful torturing device which listens to the listeners screams while they are being cut and torn apart piece by piece. Imagine the filthy, heavily distorted guitars and bass as chainsaws cutting you apart while the thunderous drums give the frenzied pace to your torture and you might get a vague idea of this. (Black Mary)

The songs are all short, but there are a couple of breathers on the album, which are just long enough for the listener to come back to reality and then just be thrown back into the violent vortex of this chaotic attack. Another major plus here is the fact that Human Agony actually write songs (instead of just making noise like so many self proclaimed ‘war metal’ acts now days do) which have a certain structure. So there’s basically something for the fans of this music and for the fans of music in general. If only they are capable of surviving through the whole album.