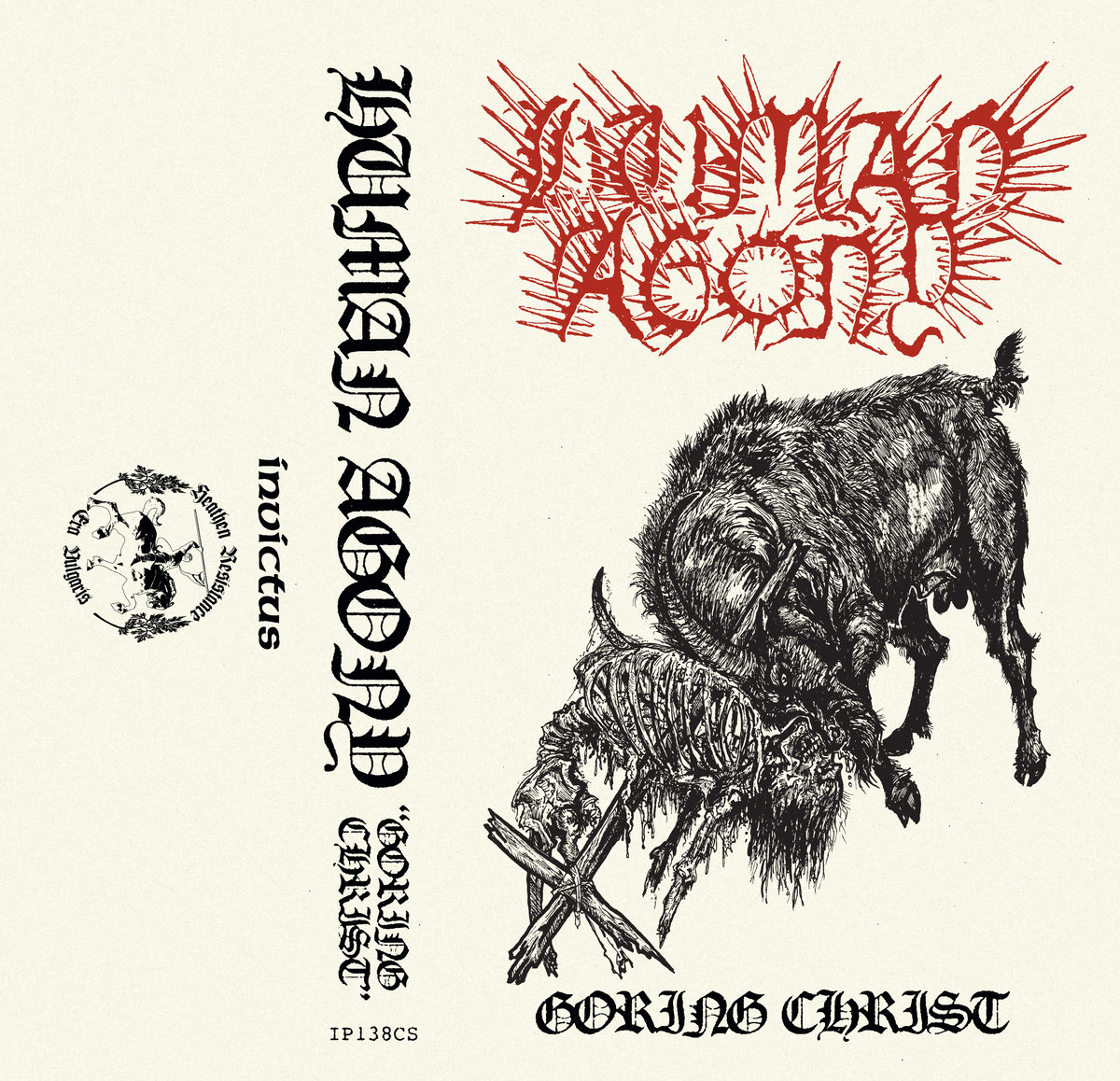 From the foreboding 90-second intro piece with militant drum rolls, tank engine noises and distant explosions, you get a sense of what’s to come on Canadian quintet Human Agony’s EP “Goring Christ”, which is that barbaric blend of bestial Black/Death widely referred to as “war metal”. This is a particularly filthy, feral and virulent strain, aided by a suitably raw but fleshy production.

The guitars are highlighted, with barbed-wire riffs tearing through the speakers over the ballistic double bass bombardment of the drums, which have that somewhat tinny sound to the toms and snare that works for deathgrind when the production is right. The crazed vocals are another strong element here; deathly, impious croaking and sharp barks with ominous guttural growling, reminiscent of Dagon (Inquisition), Arckanum’s Shaamatae, and Lord Worm from Cryptopsy.

Each instrument is wielded with precision; despite the chaotic frenzy of this style, everything plays well enough together that it remains highly listenable for any fan of harsh extreme metal, and holds up well to repeat listens. The members share time in other brutally grimy acts such as L’acephale, Knelt Rote, and Verme, which likely accounts for the clamorous cohesion here.

Opening salvo “Humiliating Nazarenic Corpse” commands attention immediately, hitting like bombshells in a storm of buzzsaw string shredding while bloody mud flies into your ears with all the furious grit essential to this ravenous domain. “Master’s Abhorrent Bleats” and “Abomination Hammer” continue to annihilate your senses, giving you just enough space to breathe through some doom-metallish plodding sections before sinking the rusted iron hooks into your brain as the pestiferous guitars shriek, squeal, groan and grind through the pulp left of your organic matter.

The simplistic yet dynamic riff structure is implemented to fantastic effect as “Human Pig Execration Ritual” crawls through its 6 minute span of wretched malfeasance, and while it’s the longest track on the EP, it never loses momentum. It just seems to continue exploding in a hellish detonation of pure malicious spite from the bottomless depths.

“Satanic Immersion in Goat Piss” pulls in the tail end of this 22 minute ordeal with blistering black metal viciousness before eroding into sinister silence. This cassette was initially released through underground label Blud Auk Tapes last February, but received a fortuitous reissue by Invictus Productions later in December, and the digital version is available on their bandcamp site. Each version features fittingly fiendish and austere, ugly cover art (the latest press depicting a putrid and desiccated Christ-corpse being, indeed, gored by a huge demonic bull.) “Hey, what happened to the goat?”

Tartarean Terminus:
A brief yet barbarous barrage of black/death destruction you should dig up at once; keep your ears attuned to this underground unit, as well as their other projects. Hail and Kill!! (Terrorgasm)