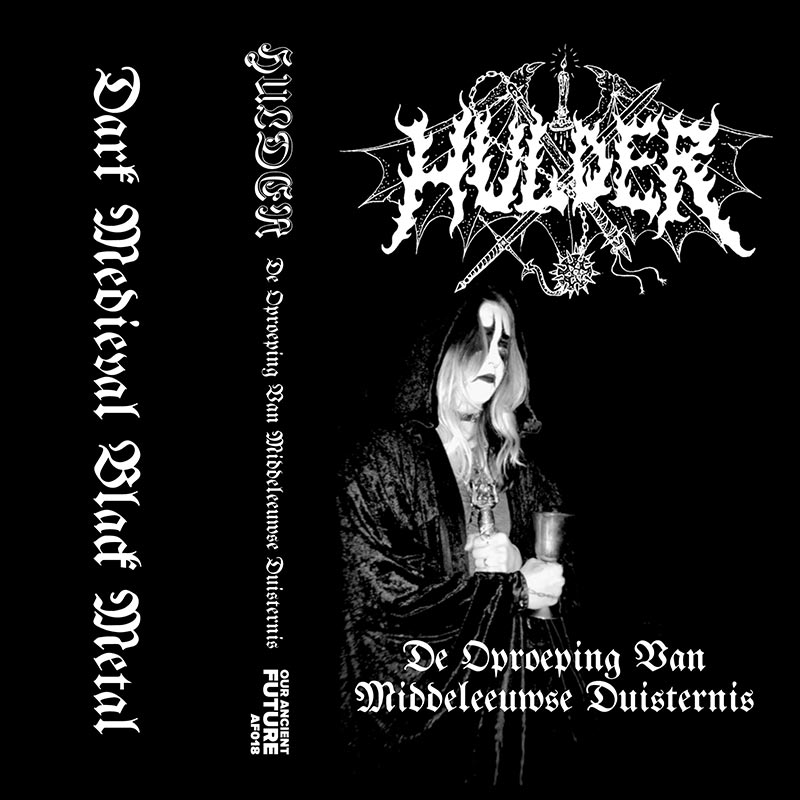 Hulder are Belgian/American band centered around the multi-instrumentalist and vocalist The Inquisitor who is also active in the Death Metal band Bleed. If I am not mistaken, the name Hulder is derived from ‘Huldra’, a mystical female entity from Scandinavian mythology. Hulder describes their music as dark medieval Black Metal. This compilation consists of the “Ascending the Raven Stone” Demo 2018 and the “Rehearsal 8/13/18” recording from 2018.We’ll start with the rehearsal…

A dark, ominous intro reveals itself with haunting voices before “Heksensabbat” begins. This song has an irresistible Burzum-like riff although the music is far from any Burzum material. Hulder manage to perform very dark, brutal type of Black Metal with very raw and coarse vocals that often erupt in bestial growls. Musically, the songs are solid, backed by heavy drum beats. “Heksensabbat” and ‘Bestial Form of Humanity” also have this irresistible Celtic Frost technique of creating an ominous recognizable riff in the slower parts. They’re far from being one dimensional or simplistic, though. As can be heard on “Implements Of Hell” with starts with a melancholic, yet very raw instrumental part. Tremelo technique on this song is amazing. The vocals sound more emotional and very savage. Last track on the rehearsal is a solid Celtic frost cover “Into The Crypts Of Rays”. This is a rehearsal, nonetheless the overall sound is quite good and demonstrates the brutality and medieval atmosphere of Hulder very well.

Next up is the “Ascending the Raven Stone” studio demo. It contains three Studio songs that are on the rehearsal as well. “Heksensabbat” starts off with the melancholic yet harsh instrumenal part before that uncanny riff and the damburster double bass drums kick in. Vocals sound sulphuric and menacing.  You can clearly sense the Hulder trademark feeling of dark dungeons, torturing and excruciating human agony in this track. The Inquisitor sure knows how to abuse the guitar by creating an enormous sound that engulfs everything, but adds melody at the same time. Incredible. “Bestial Form Of Humanity” is the second stomper, where the Celtic Frost influences are combined with solid second wave Black Metal. A raging solo contributes even more to the abysmal sound of the song and the vocals are again menacing and utterly raw and spit out with anger and disgust. “Implements Of Hell”, the third and final studio track begins with the dark, pagan and dismal instrumental intro, before exploding into the abrasive and raw part of this track. Vocal-wise, this song is brought differently,  there’s way more primal growling and emotion in the vocals. Pace shifts between mid-tempo to a faster rhythm. The atmosphere reflects the cruelty of dark medieval torture, the hysteria regarding heretics and witch and the suffering of its helpless victims.

There seems to be a new wave of rather extreme and quite original Black Metal bands emerging from Belgium. Hulder are one the most biggest surprises and carry a lot of unexplored talent. Let us hope they manage to record some more mayhem in the near future and I will be fascinating to see how they will develop their musical style. “De Oproeping van Middeleeuwse Duisternis” is a recommended and remarkable release in my opinion. Check it out. (LV)