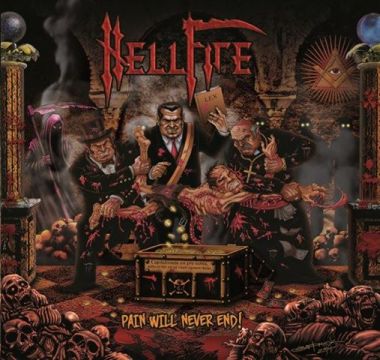 Hellfire’s “Pain will Never End” says about the abuse by the evil trinity of power – priests, judge and politicians. This has been featured in the album cover as well as the 9 tracks in the album. The lyrics are straightforward but with deep realizations on the modern civilization, view towards vagueness of religion. The sound comprises the classic South American Sepultura like sound having both old school Thrash influences like Slayer / Exodus / Kreator as well as a lot of modern and technical Death Metal like Morbid Angel / Carcass/ Deicide at times writing style. The album features some amazing modern blues-based solos and crushing yet consistent basslines, relentless drumming, with the vocal with a lot of modern influences. Particularly the mix is old schoolish yet mastered with quality.

The overture “Empire of lies” slowly introduces to the sound of the band with its theatrical opening with a Slayer / Exodus like eastern sounding composition while “Scavenger” starts with relentless urgency with guitar riffs combining elements from old school Death Metal influences as well as more contemporary elements. Amazing guitar solos and lyrics that says, “… I tell you seller. Your empire will fall. You pretend immortality. Revocate and manipulate…”. “My Redemption” though having some aggressive drumming, has some chilling gloomy full-chordal riffs as it self reflects as “My redemption. So far denied for me. My raw condemns. A fair price for all my sins”.  And finally the ending track “Mad” starts with a short cool bass intro and intervals and sums up the album saying “I’m mad man. I follow the rules of insanity… I’ll die here now. I’ll die here again. May be they’ll kill me. May be they lock me… Now I’m your hell. Now I’m your torment”.

The album is fast, aggressive and a very well structured one, that will make you listen to the 38 minute album in a single go. (Imtiaz)