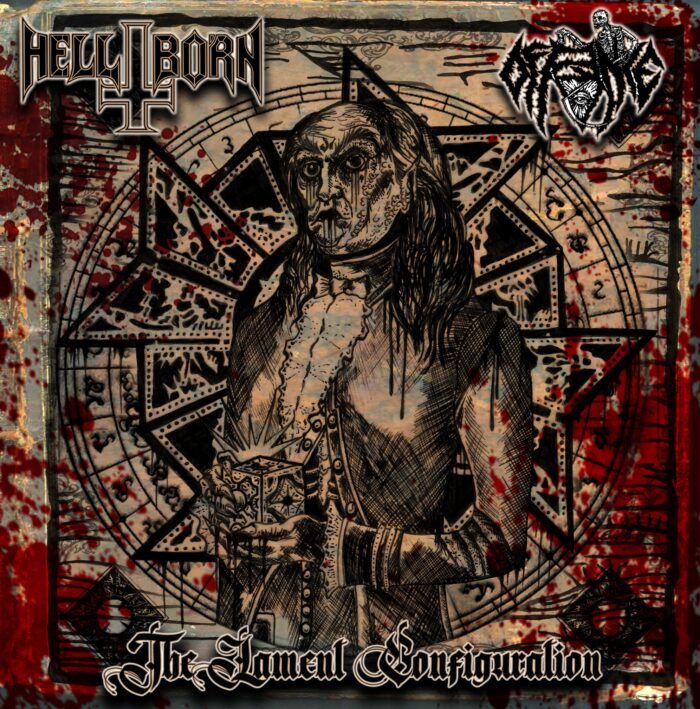 “Hellbound Hearts”, a new split CD, named after the Clive Barker novel that spawned forth the Hellraiser movies, is one of the latest releases on the Polish Putrid Cult Records’ label. Two bands from the Polish underground scene are represented on this CD.

Hell-Born are probably best known : the band started as a side project of Behemoth and Damnation members, but eventually became a genuine act. Musically, Hell-Born have always been a diabolical mixture of Black, Death and Thrash metal. Brutal, raw and fast in both performance and recording of their music. After their limited “Hellborn” EP from 1996, the band released 5 full length albums but I must confess that I lost track of their whereabouts and releases after “The Call Of Megiddo” album from 2002.

The split album features 4 songs by Hell-Born. Opener “Soulrape” immediately reveals that they haven’t lost a bit in aggression nor violence. Compared to the first albums, the sound has become significantly heavier, bordering between Black Metal and brutal Death Metal. The demonic vocals are as always deep and dark, the music fast paced and full of blastbeats as can be heard on” Hellraiser (Cenobite Cut)”, “Devourer of Souls” and “Darkness”. I couldn’t help it but notice that there are also some tiny Black ‘n’ Roll vibes present. Nasty.

Offence – the other band on the split album play old school satanic Death Metal, genre old Deicide, Vader, Throneum … Offence have released 2 splits and 2 full length albums since 2012. Poland has always produced a good deal of exquisite Death Metal bands and Offence are no exception. The massive production on this record does push their music towards a more Death/Black orientated realm. “The Carnal Pact” and “A Slave of the Ancient Race” are powerful stompers. The 3 other remaining tracks are well-recorded live performances.

“Hellbound Hearts” serves as a presentation card for both bands. Clearly Putrid Cult Records saw the potential and decided to release it. There’s a 7 inch version (4 tracks) of this album, as well as a limited deluxe engraved boxset for the collector. Those into well-produced, yet brutal Black/Death know what to expect. Samples of these 2 bands and their musical efforts can be found on YouTube.

It was pleasant to hear from Hell-Born again after quite some time, as well as to discover the music from Offence. Let the Lament Configuration begin… (LV)