Heads for the Dead – Serpent’s Curse 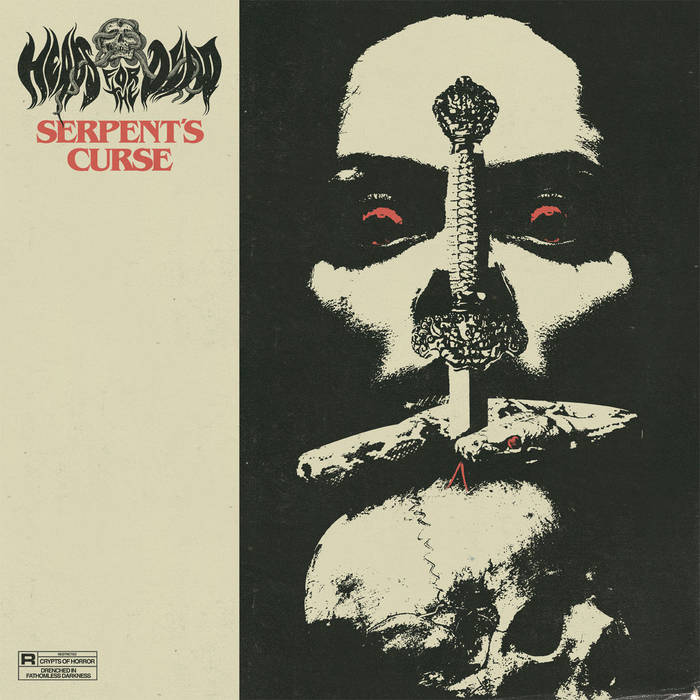 Right out of the gate Heads for the Dead hit you with the title track. The infectious nature of the track and the many twists and turns the song takes makes it very clear that you are in for an incredibly energetic and well written album of Swedish death metal. Let me clarify that a bit though. This isn’t just another Dismember or Entombed clone. The crunch of the HM-2 is here but the songs hit on a ton of different styles and usually all within a couple of minutes. Fast d-beat sections give way to funeral doom melodies before heading into a wah wah drenched Motorhead influenced lead. And this is all within the first song.

While a lot of the album is fairly speed driven, blasting is infrequent and the band clearly isn’t afraid to experiment with different tempos. The third track on the album “Deep Below” makes this evident. They slow things down to dirge like tempos and the results are incredibly heavy yet still very memorable. This is the longest song on the album and smartly the band follows it up with one of the shortest songs on the album. It’s a sharp slap across the face after the doom dirges of the previous song. Another standout is the minute long “Death Calls.” This song for all intents and purposes is a combination of atmospheric black metal and grindcore and it just works.

For a debut album this is incredibly strong. The band manages to harness the raw power of vintage Swedish death metal buts pulls it in a ton of new directions. These guys have the songwriting chops to make it all work and despite the memorable nature of the choruses, this will take a number of listens to fully absorb everything. This is a highly enjoyable forward thinking death metal album that retains enough hm-2 nastiness to appeal to purists as well. (MikeH)