Haunted Cenotaph – Nightmares from Beyond [Demo] 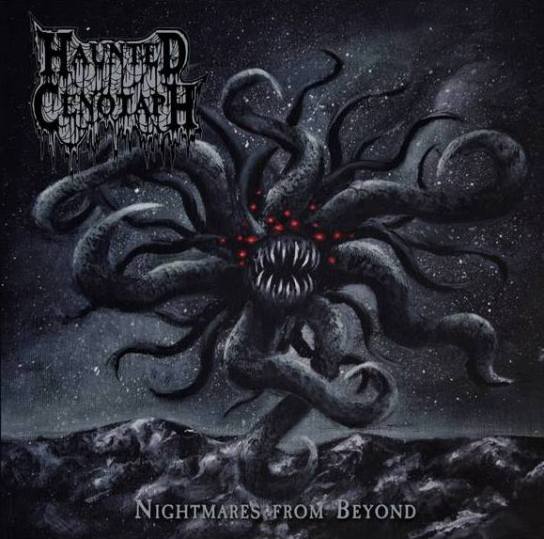 Holy Celtic Frosted corn flakes Batman if these perky young poles ( and by that I mean they are Polish, not vertical structures standing upright in the current sea of uncertainty that seems to surround us of late) haven’t broadsided me with one hell of a hammer. So good, I almost asphyxiated on this very day, the sabbath..Someone get me a candle, I forgot to go to mass… Oh shit yes, the jokes are bad, but this demo from Haunted Cenotaph is the exact opposite, so fucking far from it that you will not beleive if you are into any of the references I have alluded to above.

You want some Death Grunts, you get em. You want some brutal music that chugs along at a slow to medium pace that reminds you of the great times of old, you get it. You’ve never heard this kind of shit before, well now you have. Coffin Crawler on vocals has the perfect pitch that make we of the Doom/Death variety almost wet our pants. Gravelly grunty greatness of the highest order, and after some really freaky scary shit to start with, sounding very Evil Dead like, you will find out exactly why. “Sabbatical Vengeance”, you had me at the first grunt.

“Ritual of Evocation” proves just how much fucking awesome this band contains. A little bit of D Beat thrown in for good measure, at times even reminding me somewhat of the early works of Usurpress (And boy do I miss them..), but as a mix in general, these solidly upright Poles really have grabbed this genre by the testicles, and given them a squeeze that would drop any mere mortal.

The title track “Nightmares from Beyond” is as fine a display of the abilities of Golem on guitar, no not that fish eating fuckwit from the Lord of the Rings although I did wonder for a minute, and Brewhammer on bass, to lay down some serious concrete riffery that one could never tire of. When you think you have a passage nailed they will just shift it oh so slightly so that it remains true to form, but never gets dull. I could listen to this shit all day, and then another day, and another, and so on and so forth.

“Funeral Candles” is such a majestic beast and the finest of the fine riff wise, vocal wise, and drum wise. I have no idea who the drummer was, maybe he died in some sort of bizarre gardening accident or just exploded on stage. Maybe he (or it) was a robot, and that being the case get that automaton a nice slab of grease or a new sticker or something, because this is just perfection, every high hat ‘tink’, the rumble of the bass pedals, all magnificent. A head banging chug fest with such tone and purpose that one can do nothing other than stand back and admire.

They end this one with a cover song. I’m not normally a huge fan of cover songs, they tend to suck a lot of the time. This one is called “The Reaper”, from a band called Hellhammer. I’ve never heard of them..Have you? As always when confronted with bands that tickle my fancy, I tend to resort to profanity over the Oxford Dictionary, and again I will not disappoint.

Fuck me with the rough end of a poorly washed, possibly tetanus giving porcupine, if this isn’t just sensational. There you go, now go get some. I will be naming my next child “Brewhammer”. Why? Do you need to ask? (The Great Mackintosh)