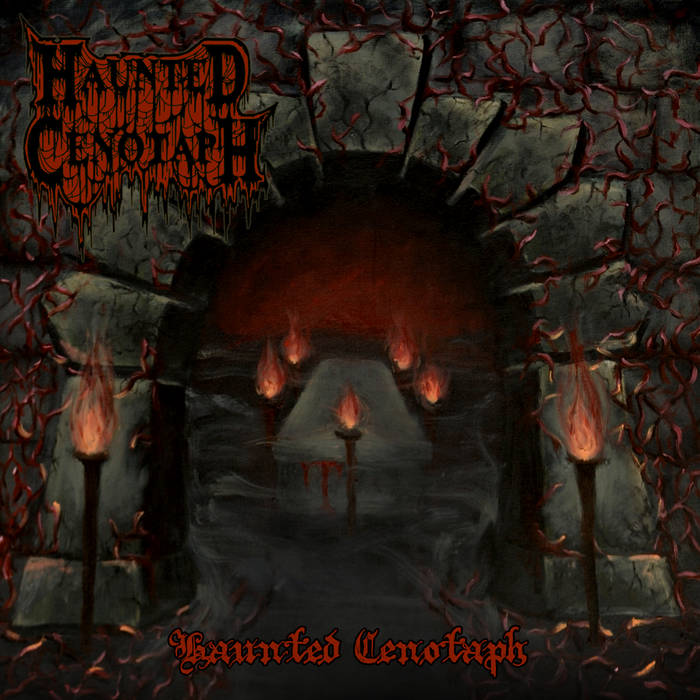 You may have gathered from my last review of this band that I like them, just a bit. Haunted Cenotaph bring us a new EP, called “Haunted Cenotaph”, and no their isn’t a fucking echo in here, that’s just what they decided to call it, and it’s far better than calling it George, or just not having one at all and having the cover all black or some sort of nonsense I’d say. Now, the good news is, well, best you grab your favourite cuddly toy and hide in the corner because my favourite vertically erect Polish bastards double down right here and make things even Doomier. Deathier, and some heavy HEAVY shit ensues.

Yeah, you get some horrible noises with “At the Gates of R’lyeh” for all you horror obsessed freaks, and it is indeed good. Mind you if my name was R’lyeh I’d get sick of all you fuckers hanging around outside my place like it’s fucking Buckingham Palace, put your bloody camera’s away, nothing to see here other than an old and tired city that may as well be lost in the sea like many other fabled cities, move along. Then you notice my double down bit.

Their debut seemed somewhat polished (pardon the pun) compared to this one. “Haunted Cenotaph” appears to be an older monstrosity, that has learned to love the filth it wallows in, and has not only grown in it, but thrived, This is without a doubt speaker shattering material, and I will only say that once, because if you think turning this up to eleven will make it sound better, you’d better have a fat bank balance my friends. At any volume, this bastard will distort not only the limits of your chosen listening device, it will infect your mind, and shatter those drum things in your ears..

Who needs ears anyway.. We have two, so if at least one is still capable of hearing, just listen to “Into the Realm of Thanatos” to check. Interestingly enough Thanatos was the Greek god of non violent death. As in you die in your sleep. He had quite the gentle touch, unlike these buggers who will beat you to death in an instant. Not to be confused with Thanos, who will keep you up all night playing bad seventies music and wiping away everything just to stare at some stupid pond in front of a place that he fucked up to start with.Digression, it’s my thing…

“Rites of the Undead” is a jarring little number to begin with. Kind of like someone dragging their fingers down a blackboard or scraping their knife on a plate. You know, THAT kind of noise that unsettles, maybe gives you goosebumps or makes you want to throw a brick at what’s left of your stereo after the initial pounding. Don’t throw that brick, don’t kick your cat or cover those bleeding ears, our friends here have not finished with you yet. The song then becomes a giant killer, a fat giant at that. Only the upright need to apply here, such are the depths of our haunted friends arrogance. How dare they. How dare they be so fucking good.

“March of the Damned” starts out, well, like fucking marching music. Before relaxing a tad into some nice slow Doom. No Death here to be found yet, more Candlemass and Sabbath, Kyuss even if one wants to stretch the imagination, then the awesomeness begins. For a moment it seems like an odd thing considering how fucking menacing these guys can sound, but then it all makes sense. Roots aren’t just all about some Brazillian band that no one gives a flying fuck about anymore. Death bits come, and the riffs follow suit, and then all becomes chaos. Not the way I would have ended this, but I’m not them.

The reason I don’t do Top Albums of the Year lists until January is right here. You never know when something will pop up like this and slap you around the proverbial chops. Suffice it to say, this has torn a hole in my ideas. Fucking magnificent. (The Great Mackintosh)