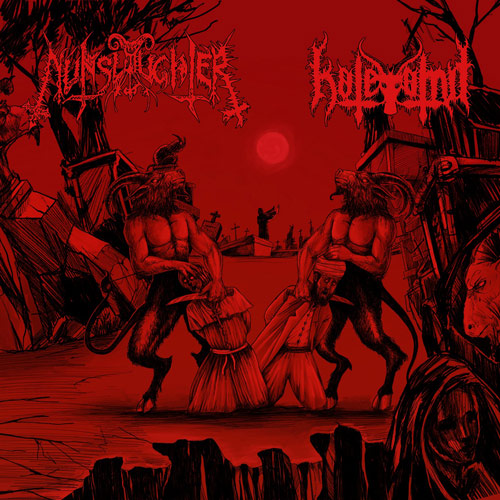 Hatevomit from Turkey / Germany are present on this split with 2 tracks which sounds like very raw Death Metal. For me it is my first encounter with this band and besides the guys behind Hatevomit are from different countries they also are or were involved in bands like Baphomilitia, Mictian, Demonslut and The Upheaval. The band is all about mid-tempo Death Metal with some fast parts and it even remembers me of Nunslaughter, which is the other band on this split, because of the composing simplicity. It shows that it is a band that is still progressing on its musical level and we will get a good debut album in the future, although I guess it should be not easy to rehearse living in different countries

On the other side we have one of the oldest active Death Metal bands on earth; Nunslaughter! They have only 1 founder member remaining (Don of the Dead) but they are still raging Metal with most fury on each record. They offer versions of “Fuck the bastard” and their classic “Satanic Slut” with alternate recording for this split.

If you are looking for some raw and spontaneous Death Metal recordings this is what you need for sure. (Gangrene Pus)