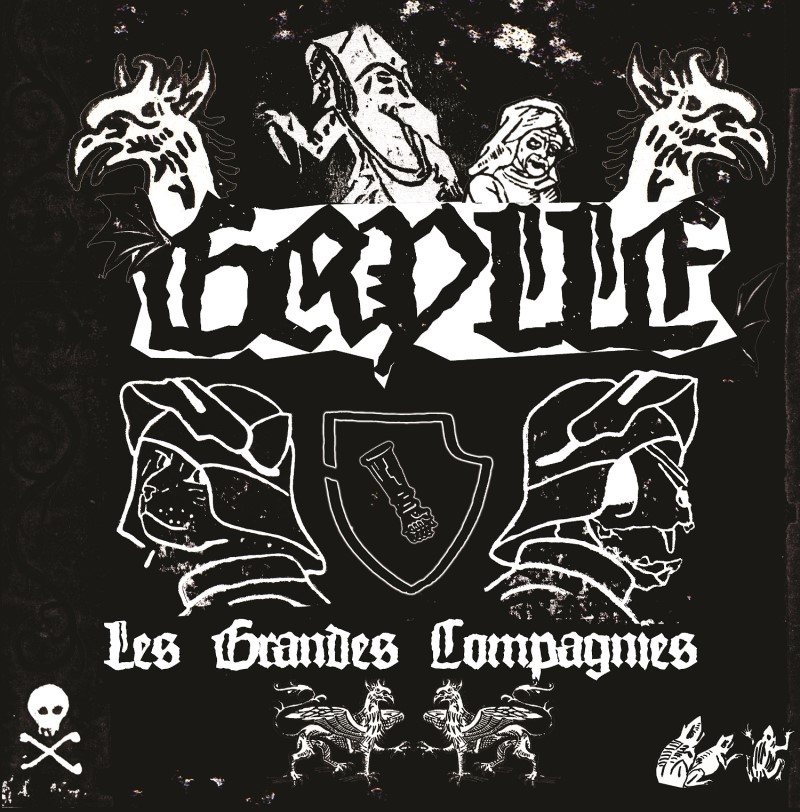 We often search for new horizons to find that which can usher us to new realms of creativity, as time passes on, so too does the art of conjuring sounds evolve and adopt new methods, for one can express the inner spirit in a multitude of colors strewn upon the canvas, or the abstract mind can be transmuted into various complex chords and strings to birth a symphony to soothe the soul. But what I have often found is that as the quest takes us outwards to venture into new fields, the source or origin is sometimes forgotten, for it is like one who marvels at the vast sea for the eyes to drink upon but forgets the mouth of the river which forever quenches its endless thirst, in other words the very womb from which this wonder is born.

‘Les Grandes Compagnies’ by Grylle is in its purest form a masterpiece which inhales the primordial air of Black Metal into its nostrils to grant life onto the gem which is this album. The very structure of this release is built upon the bones of medieval and acoustic folk-like themes where the instrumental output evokes a raw-like resonance to its flow, the composition in which these elements are interwoven into each other fit seamlessly into a singular entity and at the same time acts as the very foundation for this world to be fashioned for the listener’s senses to wander. But the crux of the album reveals itself in its minimalistic approach, for there exist no need for frivolous interjections of a cacophony of obscure sounds to pollute its air, instead the acoustic guitars takes precedence carving out melodies as though they originate from the tongue of a dryad whose spirit nourishes the forest in which it lives.

Tracks such as ‘Les Dernières Fées de France’ and ‘Le Pacte des Villes’ represent instances that showcases the melding of these crude-like entities where the result brought forth becomes an energy that feels honest in its delivery. The combination of the vocals and the acoustic strings create a rather tangible aura, as though you are forefront in witnessing the shapes of these motions unfurl itself, in my opinion, this represents another merit where the album is concerned, for the manner in which the instruments are presented, a rather ‘earth-like’ quality, and this is due to the production chosen which magnifies the atmosphere.

It is like one who sits upon the rock with knife in hand as it carves and hollows the reed in a crude way so that it may sing forth the tune of the forest when pressed to lips, for the song that echoes from the lute, even though its breath may sound unrefined, the very aura it releases can be compared to ‘Les Grandes Compagnies’. What is meant is that Grylle has managed to embed the sole of the feet into the roots of the earth, connecting and channeling forth its archaic sounds and rhythm, giving life to a hymn that emits neither sorrow nor joy, it is but a spirit that dwells within the green citadel , taking refuge amongst the pantheon of oak. Ever so often I will stumble upon certain pieces that captivate me, entices me to ponder upon its essence and architecture for I wish to bask in its presence like one who stands in the midst of a flowing river feeling the currents against the skin, ‘Les Grandes Compagnies’ shares that same feeling, as it is a work of art where you can explore its topography and vast atmosphere. (Justin Joseph)