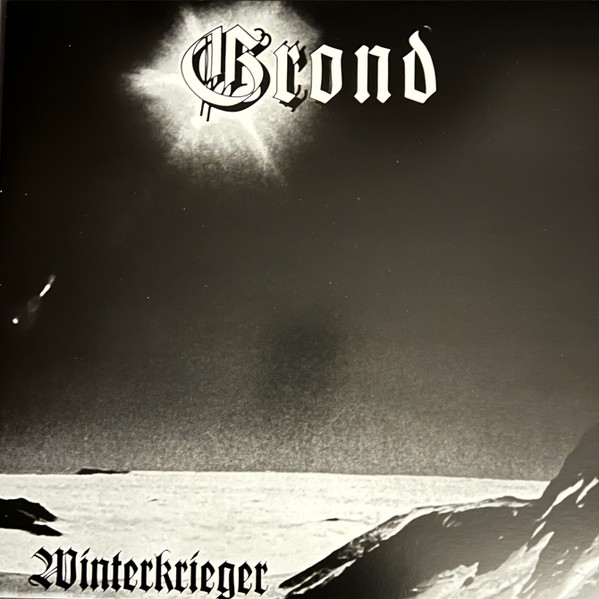 Originally released on CD in 2000 through Folter Records, this is the long overdue vinyl reissue of a German Black Metal album that can easily be considered overlooked and/or forgotten by many. Grond was a one-man act by Infinitus (who was also in a short-lived Black Metal band named Octoria, which helped spawn Endstille, and who still plays guitar in a Death Metal band called Finally Deceased), that only released one demo-tape (‘Schattenthron’, 1997) and this ‘Winterkrieger’. Rotting Misery has taken the responsibility to resurrect this piece of history.

For me this is a real piece of nostalgia, it reminds me of the times when the search for new bands went via black-and-white magazines, mailorder lists and the blind exchange or purchase of demo tapes (based purely on the name, logo, cover or title). A time when this type of music was still in its infancy and in full development. I also remember the first time I found the name Grond in one of the lists and was intrigued by it. Later on I also got my hands on a copy of ‘Winterkrieger’, at that time, it was right up my alley: cold guitars, rattling drums and raspy vocals. German Black Metal par excellence, I would say. Of course, with today’s ears it sounds a bit bland and perhaps even a bit naive, but it doesn’t take anything away from the charm of the music (on the contrary) and there are some really great riffs in there. I was also surprised, after not having heard this for at least twenty years, to even remember some of it, like for example the melodic main riff in the catchy ‘On The Path Of The Ancient’. The album ends with the beautiful and melodic ‘A Serenade In Black (Part II)’, to me this can serve as a perfect example of how Black Metal sounded in the year 2000.

Of course this is not ‘a classic’ and it was not and will not become a sales hit, but that shouldn’t spoil the fun. To me this album is a symbol for how Black Metal sounded around the turn of the millennium, with the German scene in particular – dominated by the black-and-white pages and the compilation CDs of Ablaze Magazine and the reviled Last Epitaph Records. It was splendid and very welcome trip down memory lane, I therefore thank Rotting Misery for keeping a nice piece of nostalgia alive. (FelixS)