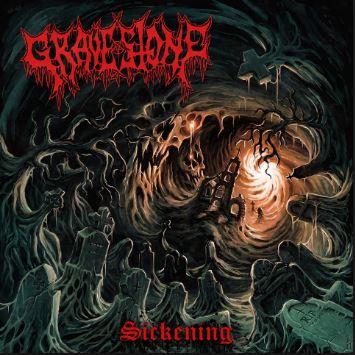 Gravestone from Sweden already impressed me with their debut “Rotten Kill” EP, which was a fine example of Swedish HM-2 Worship from the very first second till the last one. These guys aren’t going for “Original” prizes, they are after the “how do we sound the best in the 1988-1992 Swedish style” trophy. And you all know I’m still a huge sucker for that. So when the “man with beard” behind Raw Skull Rekordz told me that I have to hear this…I was intrigued. And to be honest, he is right about “Sickening”. It is one hell of an Old School Swedish Death Metal album! Like many others Gravestone follows the blue-print of the masters of Old School Swedish Death Metal, but the key is to make it stick…to persuade the listener to hit the repeat-button right after the last tone. There are a lot of bands out there who play this style and create an album that is fun to listen to, but just find a place on the shelve and collect dust. Just missing the last punch, the catchy riff etc…the elements which make an album stands out. I can assure you that “Sickening” has it all. The buzz saw sound, catchy and memorable riffs, leads, sick vocals and pounding drums, it is definitely one of those albums that brings back the good old air guitar or air drums in your room, office or car. When it comes to influences, I dare to say it is more Dismember than Entombed. But you will hear some other influences as well, as on “Rotten Kill” (the 3 tracks of the EP are present on “Sickening” as well) it has a old Hypocrisy vibe during the mid-tempo parts. And if you ever wondered how Obituary would sound with a HM-2 pedal, just listen to “Necromaniac” and it almost sounds like Trevor Peres entered the recording booth. And don’t forget the artwork, as Patrik Tegnander (Gravebomb) did a excellent job here. A must buy if you’re into…well….Death Metal! Hompesompen! (Ricardo)