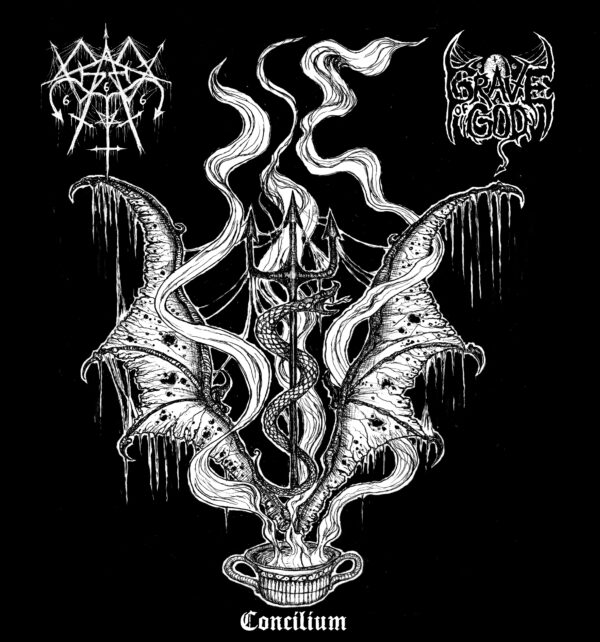 “Concilum” is a joint effort from 2 underground Portuguese bands Graves & Grave Of God, reunited on one CD and released by the Polish Putrid Cult Records label.

Graves are probably best known, having released a full length on Iron Bonehead and being featured twice on this website, besides the full-length also their “Ascensão Do Impiedoso” demo has been reviewed. They’re represented here with 5 new tracks. A piercing chainsaw guitarsound, fast paced drumming and a filthy bass create a raw, primitive Black Metal sound with echoing rabid roaring vocals trying to pierce through the thick wall of sound. The first track draws attention due to additional drum bursts, the second track is more depressing and vicious in nature, the rest are pure insanity. Graves do borrow a great deal of inspiration from the notorious Les Légions Noires, although their compositions differ in performance and are closer to the lunacy of a band like Vetala. Primitive raw mayhem, but irresistibly addictive in dark satanic energy as well as boasting a very good production.

Grave Of God is the musical outlet of a shady musician who goes by the monicker of Nocturnal Apparition. 4 vehement tracks are being fired at the unsuspecting listener. His raw brand of feral Black Metal fits nicely along Graves, yet the vocal approach is more diabolical in decadent vitriolic shrieking and the creepy theatrics from Attila (Mayhem) on a good day – not to mention the sporadic use of synthesizer bursts to emphasize his devil- music. Guitars are all over the place, pulsating abrasive riffs.

A mandatory purchase for fans of the Les Légions Noires, Vetala, Lycanthropic Wintermoon, Megalith Grave and other dark crusaders in the undercurrent of the Black Metal scene. (LV)