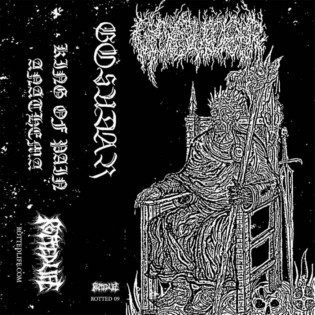 Originally released in 2018 independently but now re-released by the mighty Rotted Life label, which coincidentally also rose up from the cemetery dirt in 2018, these three mad Muscovites (from Moscow in case you didn’t know what that means), bring us two tracks of what can only be described as, well, fucking Death Metal old mate. You can also chuck in Old School if you fancy, but regardless, this is quite the goat’s testicles. Production values are kept to a more raw kind of level, and this is fine by me. Not ‘raw’ as in I’ve recorded this in my mother’s basement and recorded it on my sister’s I-phone whilst she was sleeping kind of raw, but it has a nice rough edge to the insanity, and of this I highly approve.

Track one, “King of Pain” Let’s the proverbial cat out of the bag straight off the bat. These three gents can play, and they can play damn well. Sonic noise of utter bastardry enters your ears before the riffery begins, and then nastiness ensues, and by Christ doesn’t it what. Nice big fat crunchy riffs of madness swarm over you as the vocals remind you of that time that a monster ate your very soul. Yes, you remember, the fucking thing climbed up out of your toilet at night and wreaked havoc upon your very existence, oh the pain, and yet, you enjoyed it, you craved more, you sick fuck, and more you will you get.

Track two “Anathema” is chock full of hate. You do not need to understand precisely WHY. You just need to feel, and hear the passion. Another display of sheer power, and yet it does possess a mid section of a more sensible pace for all you ladies out there. I’m just going to let you decide just who you think they may have been influenced by, for that has never been my thing. I’m also going to say that this is not a groundbreaking release, but it is fucking solid, and this is very worthy of your time. These lad’s in two tracks have laid a rock hard platform. I want more, and so should you.

Gosudar, means ‘prince’, will they be king? Maybe, a few more tracks, and we can more fairly judge, but I like what I hear so far. (The Great Mackintosh)