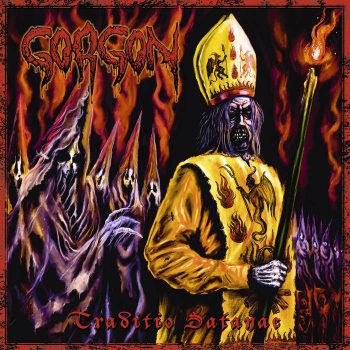 Even if you think you are fairly well versed in the (Black) Metal scene yourself, it sometimes happens to you that you overlook something. For instance, I had seen that French band Gorgon had risen from the dead and had unleashed this album on mankind. But that there was another album before that, I hadn’t realised. Personally, I know Gorgon mainly from the 1993 ‘Immortal Horde’ 7″ EP released by Wounded Love and although Gorgon is considered the first French Black Metal band, I think many are still hardly familiar with this band.

Whether or not Gorgon really is the first French Black Metal band is debatable, but at least they were early to the party. Surely, with the aforementioned 7″ EP and its first album, 1995’s ‘The Lady Rides A Black Horse’ (Dungeon Records), the band laid a good foundation for a cult existence. Yet things never really wanted to flow with Gorgon, the many line-up changes early in the career and the lack of interest from bigger labels playing a part in this. In this capacity, Gorgon will eventually exist for ten years and gets carried to its grave in 2001. In the meantime we also saw ex-guitarist Frédéric Miniutti back with Swiss band Samael for a few years.

With those line-up problems still in mind but also with apparently irrepressible ambition, Christophe Chatelet digs up his brainchild after 16 years. And guess what? On his own, things are actually going quite well. Gorgon had not been a hugely sensational or ground breaking band in the past, but still delivered fine work. Not much has changed about that musical concept. Of course, time has not stood still and it all sounds a bit better now and Christophe has mastered his instrument(s) better too, but the basis hasn’t really changed. Gorgon’s core business consists of rocking Black Metal played with a certain Punk attitude. Christophe also weaves enough melodic guitar lines through it to keep it all nice and catchy. Maybe it sounds a bit like a mix between Carpathian Forest and Thou Art Lord. Compared to the previous album, the 2019 ‘The Veil Of Darkness’-album, also through Osmose Productions, nothing has really changed. That album also has this rather infectiously punky sound and is played with just as much drive and audible pleasure. Christophe has clearly found his groove again.

The smooth, up-tempo Black Metal sounds very energetic and spontaneous, making it easily digestible. While French Black Metal is mainly known for its rawness (Mütiilation), brutality (Antaeus), ingenuity (Blut Aus Nord or Death Spell Omega) or down-right indigestibility (Aosoth), Gorgon is pretty much the breath of fresh air in the French Black Metal scene. No, of course, this is no masterpiece and it may not be a record you pick out every week, but ‘Traditio Satanae’ is just an honest, good and dare I say ‘fun’ Black Metal record. (FelixS)