Gorephilia – In the Eye of Nothing 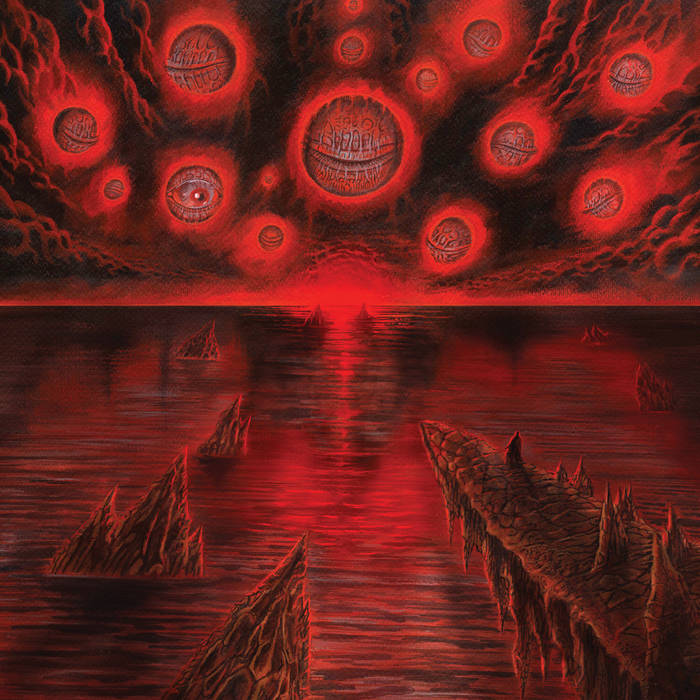 I will not lie. I am a huge Gorephilia fan since their first EP, “Ascend to Chaos”, released back in 2011. I have been following the band since then and I have been lucky to attend a few of their live shows. I also wait with a great deal of expectation every single one of their official releases and this was not an exception. Actually, this was, to me, the most anticipated record of 2020, even with all the amazing releases that were announced and some of which I am still looking forward to.

A little bit of the band’s history, first: Gorephilia started melting our brains back in 2007, under the name Goretexx and released two demos (“Rotten Lives” and “In Death”), already with the name Gorephilia, in 2008 and 2011. “Ascend to Chaos” was released as an EP in 2011 and marked the beginning of their long relationship with two of the most prominent underground extreme metal labels, Dark Descent (US) and Me Saco Un Ojo (UK). It was followed by their debut album “Embodiment Of Death” (2012). A long wait was about to come because it took them five years to release their sophomore album, “Severed Monolith”, already with drummer Kauko Kuusisalo and second guitarist Pauli Gurko. Unfortunately, tragedy would knock on the band’s door with the death of their longtime singer, Henri Kulla, in 2018, shortly after the release of their split EP with Denmark’s Undergang. The band announced they would return as a four piece (with founding guitarist Jukka Aho handling the vocals) and their first performance as a quartet was scheduled for August 24th, 2019 with an emotional show included in the Helsinki Death Fest.

The band’s third album was announced for 2020, titled “In the Eye of Nothing”, with the cover artwork being handled by Raúl González. A collection of 9 songs, including two instrumental interludes, “In the Eye of Nothing” is an album that Morbid Angel would look upon with a high degree of envy, for their master songwriting, precise rhythm and crushing guitar riffs. In fact, the band clearly climbed up several steps and perfectly balanced the fast and excruciating parts with the slower, doom-like, sections of the songs. The classic Gorephilia sound is present, no doubt about it, but with the addition of several new and refreshing aspects to their brilliant kind of Finnish Death Metal.

2 years ago, Gorephilia from Finland lost their vocalist Nemesis aka Henri Emil Kuula. Tragedies like this aren’t easy to live with and in some cases, speaking as a band, this could be the end for a project.

I am glad that the guys continued and Jukka Aho took vocals duty besides the guitar last year. 3 years after “Severed Monolith” Gorephilia present themselves in good shape with their 3rd full length “In The Eye of Nothing”. Besides the different but similar vocals, the dark vibe hits me hard on this record. The references to giants like Immolation or Morbid Angel are still present enough, but the band seems to try newer paths in terms of groove and heaviness as well as overall catchiness. The production highlights the songs even more, making everything audible and presenting the guitars more in the front which helps enjoying the riffs more than ever. The serpentine and labyrinthian riffs and drums are demanding, heavy, brutal, distorting and disturbing.

“Gateways..”, “Harnessing Ruin”, “Obscura”, just a few hints of what can be found on this record, the Gorephilia way. The record works as unit, but each track can perfectly stand on its own. Each track is a highlight, let me point some out. “Devotion Upon the Worm”, you really can FEEL the worm crawling its way through the ground, going deep down below, slowly, into darkness…One of the darkest tracks I’ve heard this year. You can feel pain and misery, this piece is just brilliant! Similar to Skeletal Remains, Gorephilia are kind enough to let the listener breath shortly, although Gorephilia do it different with a more ambient like track named “Consensus” keeping the vibe pretty dark before the hammer strikes down again with “Simplicity of Decay ” where brutal riffs, fast blasting drumming and hellish vocals go hand in hand and morph into different territories, putting in some killer bass lines in the middle of the track and slowing everything down (Immolation anyone ?). The acceleration afterwards smashes planets and then, boom! Heavy rhythms and tasty guitar solo thrown in for a multiversal experience, last tones by  the bass, sick!

“Not for the Weak” keeps its promise with the title. Ultra heavy track that becomes truly a Death Metal highlight from the second half on, lit by this lonely guitar playing a heavy as fuck riff and then things keep turning (or prefer burning?). “Death Dream” is another instrumental, this time guitar and bass laden, more melancholic, reverberating, setting things up newly for the final chapter, the longest track on the record, “Ark of Undecipherable”. The Lovecraftian horror reaches its climax. The track starts crawling, builds up momentum and the blast with all anger. Fantastic riffing and beats used on this track, especially right after the first blast attack and after the second one, the ladder being led by a melodic lead guitar introducing the next heavy, dark part of the song, progressing, evolving, morphing constantly. The last third of the track got it all: blasting, backbeats, double bass carpets, atmosphere, twin vocals, twisted riffing, nerve twitching rhythms and harmonics, intricating while still comprehensible.

The third Gorephilia record “In The Eye of Nothing” is their darkest, most balanced and challenging record so far. Fans of Morbid Angel’s “Gateways to Annihilation” and “Formulas..”, Immolation’s “Harnessing Ruin” or “Close To a World Below” as well as Dead Congregation and the likes should mark their calendar, this is another huge Death Metal record! (DPF)