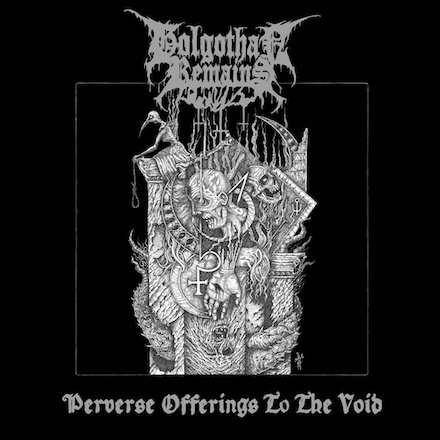 With their demo in 2016, they gained some notice in Australia and even outside the land down under. And although they featured in (underground) press and received good rates, they decided to release their debut album “Perverse Offerings to the Void” on their own. Good be a good thing as you have artistic freedom from A to Z, but getting the product to masses and promotion can be a bitch. Fortunately 3 labels are willing to do their share in this so the Extreme Metal of Golgothan Remains is available for everyone who enjoy their Death Metal a bit massive, dissonant and with a twist.

When you take the darkness and massiveness of Incantation, the song writing twists of Immolation and dissonant parts of the French Black Metal scene or their fellow Australians Portal even, you will get a drift of “Perverse Offerings to the Void”. And although I mentioned the Black dissonant part, let say it is a bit Deathspell Omega, it is not Blackened Death Metal at all, therefore the Incantation and Immolation influences are far too strong in their music. For some the Death Metal of Golgothan Remains will be labelled as “difficult”, others will describe it as the equivalent of sheer darkness with lots of pace variation and twists. (Ricardo)