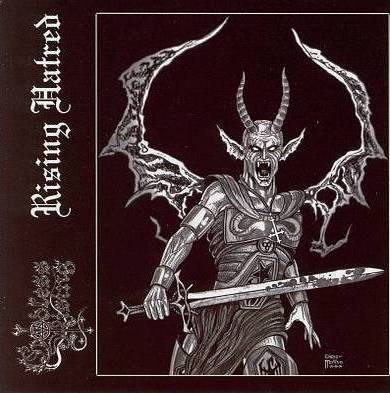 A couple of months ago, Godless Rising’s second album, “Battle Lords”, cheered me up with its classic USDM headbang-heavy sound. Now Moribund have seen fit to re-issue the band’s debut, “Rising Hatred”, which only saw limited release first time around. What does this listening opportunity reveal? Well, it may be to damn with faint praise, and it’s my fault for hearing them in the wrong order, but it proves that Godless Rising got a lot better at writing songs between albums one and two.

“Rising Hatred” isn’t terrible as such; it has the major plus point of Jeff Gruslin’s killer vocals, which are relentlessly brutal, and there are a number of impressively neat riffs and fills to bring pleasure and delight. “Mortal Failures”, for example, starts with some squealing, twisting leads and builds up to an irresistibly heavy, catchy chorus, and tracks such as “Into Obscurity” replicate to the exact harmonic the tone of classic Slayer, Deicide, and, surprise (Gruslin helped found them, after all) Vital Remains. A meaty bass helps add menace, whilst the drum attack is energetic and extremely competent.

Unfortunately two factors weigh against these bonuses; firstly the production, which has apparently been re-mastered but not with great efficiency. The guitars feel buried, and the whole thing is a little flat. Secondly, these tracks lack the vitality and invention that start to creep in on “Battle Lords”. A lot more originality and power would have helped carry the tired Satanic themes of this album. Around about “Devour the Cross”, the interest levels just dip too far. The bonus tracks turn out to be repeats of two of the earlier songs, and so do not add any further fascination.

On the strength of this album there was the threat that Godless Rising would turn out something like Napoleon Dynamite’s Uncle Rico, always wishing they were back in ’82 so they could’ve made it with the big shots, and not really living in the now. Fortunately the riffs got sicker and the song-writing got sharper for “Battle Lords”, and hopefully Godless Rising will continue in that direction- nostalgic but still with listening value. It’s nice “Rising Hatred” was made available for the fans, but the newer stuff’s miles better. (EllenS)