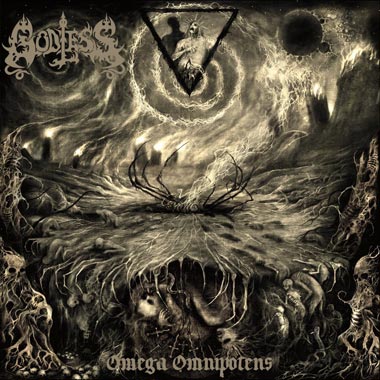 The Death Metal flag flames very well for Chile. High-level bands spit blasphemy and terror with conceptual productions that speak very well of their scene. What is happening in the twisted head of the composers of these songs? Applauses for their creativity and devotion to the dark.

Precisely Godless belongs to this group of bands. This act is active since 1997 and that has been solidifying its proposal until to reach this EP that suffocates you with a mantle of horror. Both the musical direction and the sound for which they have bet (with the reduced brightness) add up so that the material gives you the impression of being a “gourmet” piece, only for those who understand the darkest and most ethereal metal.

“Omegenesis” is the first track of this production, which works as an introduction. A very dense piece, with half-time riffs and a drums that advances like a procession of a thousand deceased, but with some irruptions of double kick at full speed. The band seems to have had the best of judgment choosing it as the first track. I say this because it is the best welcome that the EP can have and perfectly summarizes what we are going to listen to later. Almost ending the song, one of the most exquisite characteristics of this type of Death Metal is noted: heavy blast beats and slow riffs interspersed with double picking. Serious, deep, extreme.

To make this work more conceptual, Godless has united all the songs. They only present a thematic separation that divides the work in “Mors” and “Onto-Thanatos”, as we will see later. The first track is linked without pause with “Acausal Continuity”, a tremendous song impregnated with death. The harmonizations used by the guitarists are thought intelligently to provoke a terrifying sensation, inescapable in this style. The extreme panning of the strings helps a lot, and that it becomes tremendously noticeable in the stops where the guitar is left alone. In the same line goes The Verb, The Antinomy, third track of this EP, which starts with a faster drums and the bell ride well set, formula that has already become a hallmark in this style. The abrupt cut that comes after is the most interesting and sinister, with the guitars sounding alone for a long time and using overwhelming bendings, while the voice seems to arrive from the underworld, disgustingly cavernous.

As mentioned before, this work is divided into two parts, and it is on the fourth track where the second fragment of the work begins. “Dissolutio Perpetua” is an atmospheric composition full of synthesizers and sound effects, which could well symbolize the cosmic terror that HP Lovecraft inherited to us with his works. After a mysterious introduction, which includes a kind of didgeridoo vocal, begins the fifth track, “Horror Vacui”, Latin expression meaning “Horror to the emptiness”. Some dissonances in this track can bring to our memory the Australians Portal and could also be said that in this song they play with other elements more typical of War Metal (in the case of drums) or Death Doom Metal, but as sparks that adhere to the style own of Godless. At the end of the song a sinister distorted bass enters the path to the last track, The Sovereign Void, a great work that has its highest brightness in the middle part, a very heavy sequence of two chords that are repeated with drum beats that are transformed in rhythm, while the vociferations come from the fucking hell.

Every death metal fan in the dark way will appreciate this work very much. Followers of Mitochondrion, Phobocosm, Portal, Unaussprechlichen Kulten (his compatriots), Disma or Dead Congregation will be very pleased to hear Godless. (MarioR)