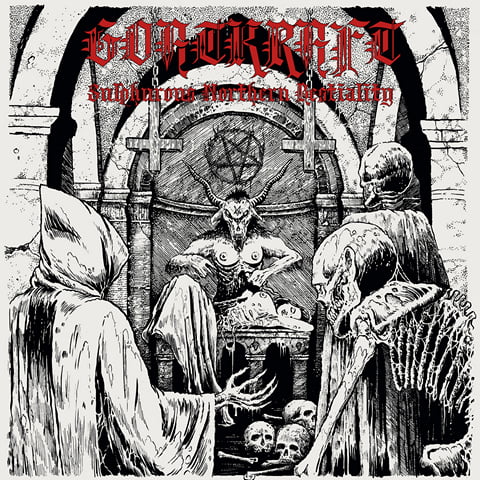 The goat worshipping war boys returns! Now with a full album after the excellent EP, let see how things goes here. Bear in mind, this is a debut album. Some time after the EP had been released, I’ve seen some people dubbed them as the Norwegian version of the great Black Witchery. I assume that would be referring to the ferocious burst which are very predominant in the song structures. With a lot of bands around playing War Metal / Bestial Black Metal, we are actually left with two options: either a cheap crappy copycat, or a genuine smasher. Goatkraft definitely belonged to the latter.

Let me highlight the strong point of the album. With 11 tracks (and that includes some interludes) blasting for 28 minutes, they doesn’t lost its momentum during the whole record, from one track after another. The aggression holds firmly strong whilst maintaining the song structures energetic form. Thermonuclear dynamics, getting everything floored on its path towards the final grid. Everything is fashioned in rapid attack mode from the beginning, no rest for the wicked. That’s why this is a pure smasher. Frenzy vocals, crazy tremolo picking (yes, I’m actually quite surprised to really heard this kind of stuff embedded in the compositions! They just adds more dynamics to it), thunderous bass sound, blasting drums. Wild raw primitivism. This is very old school sounding, done right. Did I already mentioned this in the EP review? If I ever did, it’s worth mentioning here again.

A lot of things are done with careful attention to details here. And I need to appraise them for having the bass guitar at a listenable level. Some band seems to leave this part out, making the bass almost non-existent. And the drumming isn’t sloppy, what a true relief! It’s rather simple, but it worked. There’s no point in trying hard doing something extra-ordinary if it ends up sloppy or just plain ridiculous. There are a few songs that contained dual vocalization, and I really fancy this combination since the 2nd vocalist opt the harsh deep grunts, reminding a lil’ bit of the mighty Archgoat. When they decided to also do this on the last track, it’s just a perfect closure.

With cheap trendy clones, most probably it’s going to bores you right after the second track, so just forget about getting another full spin. They just put everything on high volume, and get as noisy as possible, enshadowing the crappy playing. But this, you wouldn’t get enough out of one spin, so several repetitive spin is highly recommended. For a debut album, this record reeks highly of negativity. Good!  Play this loud, put it on repeat, ftw! (JvH)