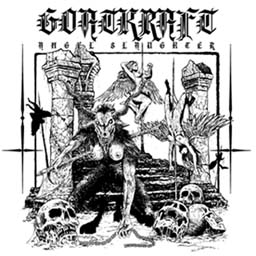 When you noticed there’s a cover song from the mighty Black Witchery while taking a glance at the track titles of this EP, then one need to expect something out of the ordinary from a Norwegian Black Metal band. That ferocious blasting coming right onto your eardrum at the beginning of its first track, doesn’t seem to want any mild moment until the end of this whole record. Even musically Goatkraft would obviously belong into war metal by genre categorization, production-wise they have such a good clean solid sound. Everything is clearly listenable underneath that thick layer of ferocious blasting. This was already evident in their previous promo recording, prior to this EP. And that tight playing avoiding any sloppy part possible, really does enhance the overall intense atmosphere. Music-wise, these goat-worshipping warboys belong to the league of Beherit, Blasphemy or even older Tsjuder, Beastcraft or Koldbrann for its crude barbarity. Well, references with the ‘B’ bands are just coincidence by the way. As cliché as this may sound, Goatkraft definitely didn’t try to re-invent the wheel of sado black metal, as musically they opted for that simple primitivism of such said craft. But having such a badass bass sound, and berserk sounding vocalist had definitely make your listening session very pleasantly satisfying. And the drumming is not the average-boring-monotonous beat, he’s bashing those crash cymbal insanely wild! 6 tracks clocking at around 18 minutes is definitely a serious storm. (JvH)