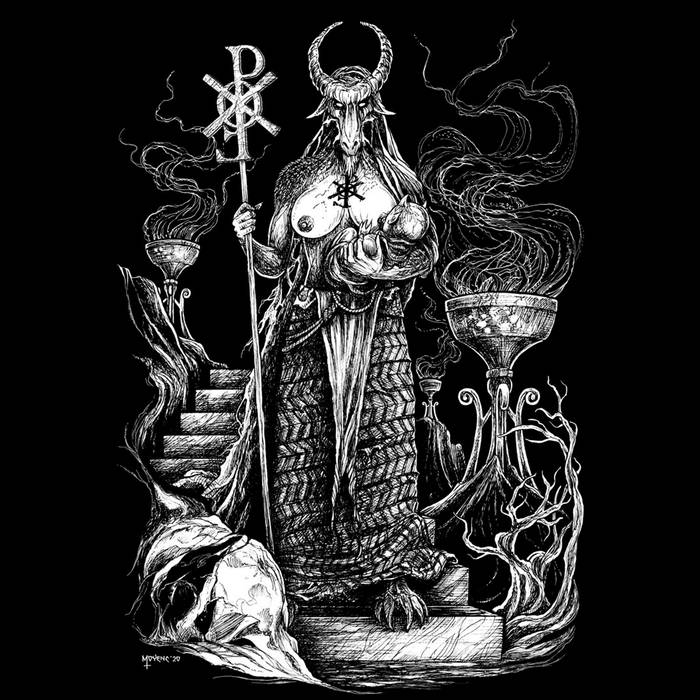 Goatholocaust were a side-project/band by members from Vociferian, operating between Belgium and France, as some distros described them at that time, due to some of their several other side-projects, that involved French musicians.

This band debuted in 2004 on the “Maître Bouc” split tape with Vociferian, later re-released on CD by Regimental Records. Their infamous debut, “Satan Jugend” was released on CD by Infernus Rex and re-released on tape and vinyl, with different artwork and layouts by the mighty John von Wolfsblood from the Canadian VonFrostRecords. One of thé elite of fine connoisseurs of older pearls and other trendsetting gems in musical history. The tracks of the “Maître Bouc” split CD were also re-released on tape and vinyl, renamed “Satanik Kult ov Inversion” by VonFrostRecords.

It’s clearly that John isn’t the only one who saw or sees the denied potential of Goatholocaust and especially Vociferian.

“Neuvaine Du Mal” is said to be a 13-year old studio recording (which means it was recorded in 2007). It was left on the shelf at that time, because the members involved, concentrated more on Vociferian – not to mention the other dreaded projects Lüger, Conjüratör, the brillant Alienante Damnation, the notorious Crux Dissimulata (2 complete CD albums), the 2005 Widomar album, Macabra (horrifying metal of death) and the truly KULT release from Archaic.

I also remember having my hands full, trying to obtain these precious CD’s. And this was the pre-Internet era.

But I even managed to obtain that awesome double CD-r Video cased compilation “Lord Genocide ‎– A Necrospective”.  A total of 36 songs, with a 24-pages booklet and featuring tracks of the Lord Genocide’s musical career with the bands Vociferian, Crux Dissimulata, Lüger, Archaic, Conjüratör, Widomar and Goatholocaust. It must be over 2 hours of musical tribute. This release deserves a proper re-release on a genuine CD format, or even a luxurious vinyl box-set.

The critics of that time weren’t exactly too mild, nor too wild about Goatholocaust & the other bands, although describing the music as being extreme enough, but rather too plain, sounding unoriginal or being a spinoff of the other bands, not to mention with all the clichés possible, that came with this genre and the reviews from that era.

But enough of this trip down Memory Lane and my typical ranting.

“Neuvaine Du Mal” (Novena of Evil), a 9-track recording, but mixed and mastered by using the most modern digital technology.

The first track breaks loose in full demonic glory, raw vocals, blast beasts and then…shifts into a smaller gear and even into subtle riffing. The sound – the sound is perfect. Full & rich and with more details than ever without resorting to a multitude of digital fx. Second track features the vitriolic and serpent-like demonic vo-killz of NunSSlutgoat, the scariest woman on earth, often whispered in fear as being ‘The Black Madonna from Hell’.

Third track features both LeathergoatSSkull and NunSSlutgoat on bestial roaring – the music has never sounded so clear and diverse. Drum blasts aren’t from a machine but done by a ‘human’, seldom have I heard such abuse on the skins.

As said: it is not all blast beating and rampant extremity, there’s a lot variation in the songs and everything seems to be focused on atmosphere…dark inhumanly, suffocating atmosphere.

Each song is pushed to its apex. No fancy reverb, nor echo to create that creepy old school feeling as it is often used. No cavernous fx – this is plain violence and raw evil, as it has always been the case. An audible bass, a foul chamber-wide grinding guitar sound, animalistic pounding on the drums and that rotten tyrannical voice…it’s all there…and more.

What we have here, is a classic 2007 recording, wrapped in the dynamic mega-force of a modern production.

Conclusion: a well-deserved 100 % score for this timeless masterpiece, beautifully packed in an amazing gatefold digisleeve, with the legendary (especially designed) artwork of Chris Moyen. The album made me feel like a teenager again, getting his kicks from playing the vilest, filthiest black metal he could lay hands on and blasting his neighbours into a state of lunacy…Those were the days…

I’ll spare you the titles – they’re pretty ‘extreme’ as usual. The album clocks out beneath 30 minutes, but that is more than enough to revel in, believe me.

On a (personal) note I hereby wish to pay my respect and tribute to John and his VonFrostRecords label. Thank you for believing in the potential of this band and for re-releasing those little black pearls of old on tape and vinyl. We all know you don’t make a profit nor a living off it. But your continuing devotion and dedication should earn you a statue, alone. We know why you do it and we love you for it ! Thank you so much, Sir.