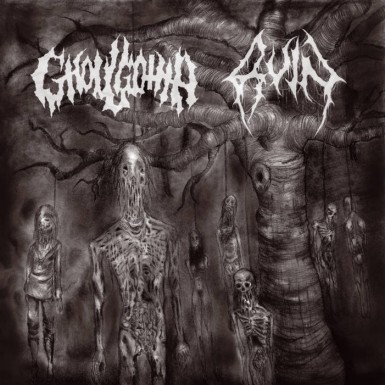 One of the last releases of the year 2016 turned out to be, unfortunately, the last Ghoulgotha release. The band officially called it quits a few months after the 7’’ saw the light of day on Blood Harvest. “Churning In Vertebraes” made sure they got out of the scene in style and at the top. The track is, once again, composed following only their own rules, never caring for whatever death metal songwriting guidelines might be in place. Being their last song, it deserves to be played repeatedly, making us go back to their complete discography and wishing someday they come back from the dead to present us with more high-quality death metal. Ruin’s track, “Becoming Disease” is a great death/doom track, with a very different production and vocal style when compared to their 2017’s full length “Drown in Blood” (out on Memento Mori). Quality wise, though, it reaches the same high level as their debut with the same terror atmosphere surrounding every second. Both tracks, with almost the same length (close to 5 minutes), were exclusively written for this split release. (Antonio)