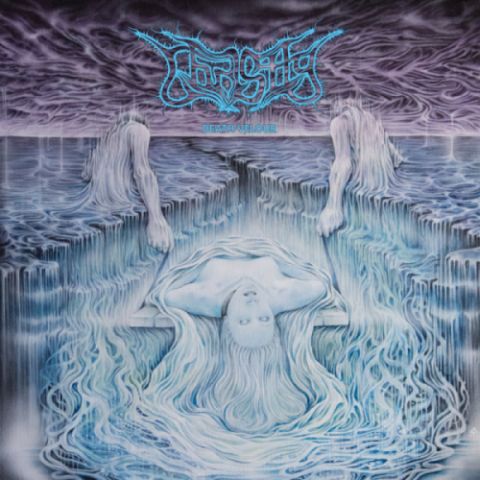 A devilish duo called Ghastly was formed in 2011, spreading death (metal ) all over the world. After their debut (which I missed) in 2015, Ghastly return with a good second slab of death metal the ancient way without sounding too “old“. The cover reminds of old Finnish (yes, they`re Finnish as well) classics like Funebre`s “Children of the Scorn“, that feeling at least. The production is well balanced, not that fat as it is more on the organic side, with a slight vintage sound (Tribulation maybe?). The music itself varies from Entombed like passages, horror melodies included, to the crusty riffs which are more on the Autopsy or Obliteration side, and change to Floridian riffing, somewhere between Morbid Angel and a little hint of Monstrosity. The vocals are higher rasps, well placed with great variations and some deep growling which adds a lot to the atmosphere here and there. Some parts are more repetitive and going into trance like states. There is a certain psychedelic vibe because of its overall sound like some new Necrovation, Tribulation or StarGazer. Every instrument adds its craft, although the main focus are the guitars and the vocals on this effor. Good second album, which offers great riffs, good evil atmosphere and cool song writing. There isn`t that much of innovation here, but it is a more than solid album which I would recommend to the extreme metal fans out there. (DPF)