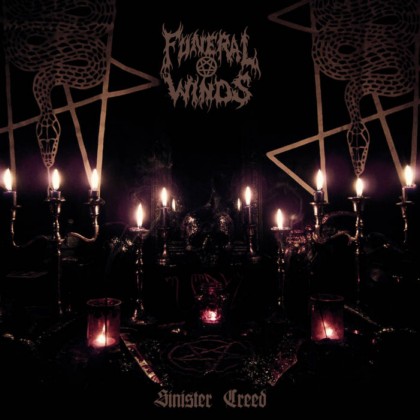 You have to give props to a band that has been active since 91 (with a break from ’07-’18) that had put a ton of demos and some splits out, but this is only their 4th album. I’d say that’s keeping it way underground myself. Musically, it is, to me, in the same style as when they disbanded/took a break in ’07. Fast, raw, intense Black Metal, yet, I’m picking up, in parts, a punk/hc vibe, specifically D-Beat. The vocals are, as always, chock full of utter contempt and hatred. Being the only original member it seems.

Hellchrist Xul (vox, original member) has put together a group worthy of the Funeral Winds moniker. The art reminds me a bit of Mortuary Drape’s latest album, in a good way of corpse…steeped in occult/satanic altar like imagery.

If you liked the last album, “Nexion Xul” from ’07, this isn’t far removed musically or vocally. It has all the ingredients for a great Black Metal record…and is a fine addition to not only their countries small scene, to Black Metal in general. Funeral Winds never disappoints.  (LOD666)