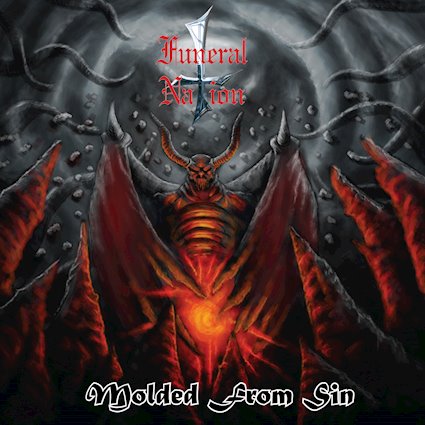 Since I’m new here at VM-Underground, I’d like to make something clear. No matter the circumstances,  I never write with any bias. I’m not even a writer ‘per se’, as I haven’t written reviews/interviews since the mid 90’s writing for my Mourn zine that never came out due to legal issues. I’m just a fan that loves to spread the word about Metal. Especially Underground Metal. I have never had a problem being honest, even with friends bands, even if that means I don’t like a release. To me, the music in a review comes first. That being said, back to my point. I’m friends with Funeral Nation and have done everything from getting them a last minute headline gig at a fest we played to being sole distributor of 300 “Come Kingdom Thy” tapes that were found in storage after years. And yes, I’m  a fan as well. Regardless,  I’m here to let you know about the music as i hear it, again without bias. Now you know a little more about me.

Funeral Nation should be a familiar name in the underground,  but sometimes bands slip through people’s radars. They started in in Chicago, Illinois in 1989 with their “State of Insanity ” demo, included on this comp. They joined forces after having done time in other legendary groups, Funeral Bitch and Master. Since they began, they have played a unique style of Death/Thrash and still consists of the same 3 founding members.

Ok, on to what is on the compilation. What you get here is the 3 tracks from the self titled EP from 2017 plus the 2 demos that sandwich the legendary album “After the Battle”, namely the mentioned ’89 demo and the ’93 demo, “Benediction”. The 3 tracks from the 2017 EP sound like they came from one of the early sessions. This was one hell of a comeback.  The demos sound like they came from the master tapes as the sound is stellar on both. Expect headbanging,  neck snapping Death/Thrash of the highest order. These maniacs have kept their sound over the years and have never bent. Real Metal NEVER bends! The quality of musicianship and songwriting is 2nd to none. Includes a 20 page booklet with pictures,  lyrics and an interview done by Norwegian Maniac, Metallion for Slayer Mag.

Available from VIC Records, the band, and all filthy music dealers.  If you like it, support them and pick up this or any of their releases,  you won’t be disappointed.  (LOD666)