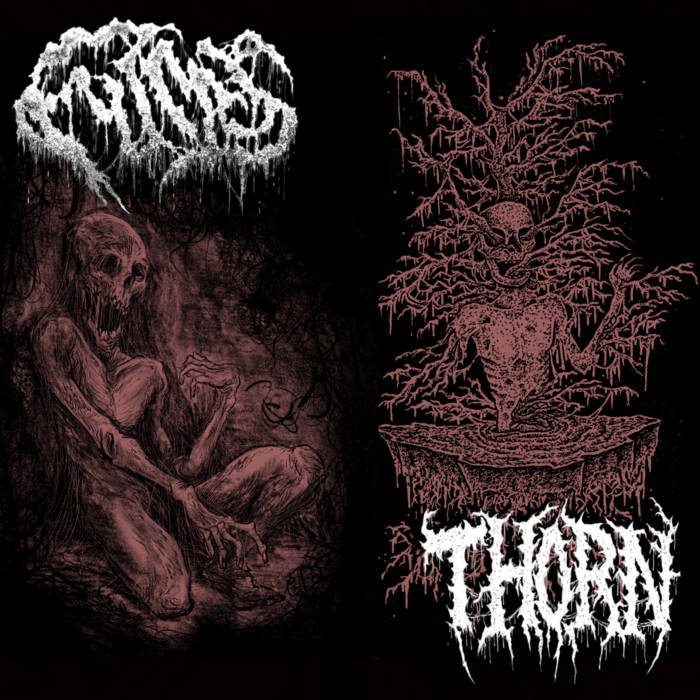 Though Toronto based duo, Fumes, came out with compilation EP “Assemblage of Disgust” with new single “Drain The Ichor” on the 28th of January, their split with Arizona based solo project, Thorn deserves recognition more so. The chemistry between these two groups with members active in Gutvoid, Grotesque Mass, and Fluids, people shouldn’t sleep on this.

Roughly 15 minutes of digestible material, contains Old School Death Metal structure, melded with a touch of melody & resonates on both ends of an immensely spacious atmosphere in their tones.

Fumes’ side features artwork by GruesomeGraphx, resembles a stiff mummified corpse attached with rigid, sloping webs as if he’s been sedentary for centuries. Thorn’s side has cover art done by Such is Life, a corpse emerging through a rooted stump, useful as branches stem from its stiff figure, basically a reincarnated corpse blooming into a lively tree.

Opening with Fumes “The Eremetic”, a dark ambiguous tempo that’s oddly comforting, with guitar riffs inspired by some cryptic Egyptian sarcophagus beneath the surface, which makes sense since the track title is derived from a term someone living alone in solitude, or if you want a better example, watch Ren & Stimpy’s season 4 episode “Hermit Ren”. “To Remain Eroded”, technical arrangement with industrial style drumwork, it’s captivating to coincide with bellowed vocal cadence, as if recorded inside a cave, wonderfully displayed melody in guitar work and dominant bass riffs towards second half of song, more sturdiness.

Solid production between & aligns perfectly with the next two tracks, starting with Thorn’s “Eclipsing A Dying Sun” is more fast paced and vocals heavily doused in reverb, full of dominating vibrancy and packs a punch. Closer “Iron Sharpens Iron”, forceful and vigorous, so much aggression and depth that multi- instrumentalist Brennen Westermeyer carries so effortlessly, it’s impressive.