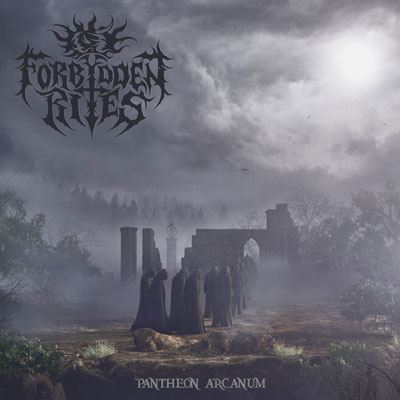 The 1990s Death/Black, Melodic Death, Melodic Black, Blackened Death or any other lingo you want to give to the style the Scandinavians mastered in those days, if you want to play it nowadays, you have to be of a certain level to get me convinced. Some will whine “you’re just an old bastard” but just listen to the old albums of Sacramentum, Dissection, Unanimated, Cardinal Sin, Gates of Ishtar and many more, and some of you will agree that not a lot of recent releases matches those quality. Forbidden Rites is here to change my mind…Long-time friends from Mexico (although one resides in Cyprus now) came together again after 20 years and realized they still have the same passion for Extreme Metal and started Forbidden Rites in 2017. As you can see, they didn’t waste much time and realised a debut full-length quite quickly.

Without doubt they are influenced by the 1990s scene I mentioned earlier as you can clearly hear it in the riffs and song writing which is more towards a mid-tempo variant of Sacramentum’s “Thy Black Destiny” and Gates of Ishtar’s “A Bloodred Path” than the fury Dissection’s “Storm of the Light’s Bane” behold. This wouldn’t be a problem at all as both are high quality albums, but I don’t hear the hooks on “Pantheon Arcanum” those albums do have.  Personally I’m not a big fan of the vocals as well, as they are more “cruncy”, but not high-pitched screaming, Black Metal like vocals. But maybe I’m more used to the more icy vocals on albums like Vinterland’s “Welcome My Last Chapter” or Sacramentum’s “Far Away from The Sun”.

At the end I can only say that I do hear their ideas and intentions, but after a couple of spins I can only conclude that they don’t match the old scene yet. This is an above average album and hopefully these guys come up with a better album next time. (Ricardo)