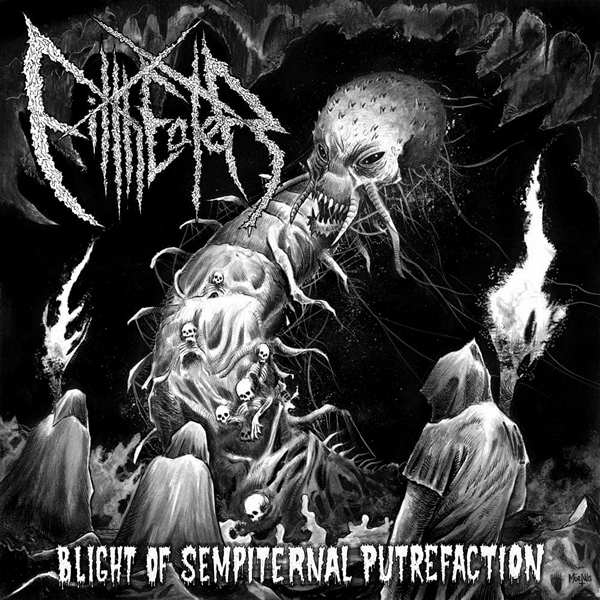 Filtheater is a four-piece Death Metal group from the United States, active since 2010 and after a slew of EPs and a split release, it is about time to see a full-length. Blight of Sempiternal Putrefaction is every disgusting facet of Death Metal distilled into a highly enjoyable 37+ minutes. Members are listed as C. L. on bass and vocals, D. M. on drums, S. M. on guitar, and K. J. on guitars and vocals. I became aware of this group through Jared Moran (K. J.) when I thought I had discovered everything he was involved in on Speed Ritual Records, and he informed me I was wrong. This album is made of low growls, guitars that switch easily between lighter Black Metal influenced riffing, to dark and monstrously earth-shattering Death Metal riffs, and thunderous bass.

The drums are the only problem I have with this album at all, and it isn’t the entire thing either, only some of the time. The snare sounds like someone exchanged it for a block of wood as a prank, and the drummer just went with it out of spite. Every other aspect of the drums is perfect for this kind of music, and the different tempos are handled with equal skill. There are even times, specifically when not ridden like the last horse in the stable, where the snare sound fits within the full run of the kit. It sounds the best when hit somewhat less frequently in the middle of absolute madman mode, since the rest of the kit sounds incredible.

As I mentioned the bass is huge and very complimentary of the guitars in keeping the overall tone deep, dark, and goddamn dismal. Bass lines slickly serpentine through the dangerous battlefields the guitars and drums bring forth; though it isn’t high in the mix, you cannot mistake its presence. The guitars are perfect for this particular style; blending the grim heavy hammer riffs, and lighter flaying riffs, with otherworldly solos that sound transported in from another universe at times. The vocals are the nearly guttural low growl that this style demands from its practitioners, and they are pulled off flawlessly.

Filtheater is an absolute monster band that deserves a place in the pantheon. “Blight of Sempiternal Putrefaction” is a nearly perfect album, slightly marred for me by the snare drum alone; save for that, this would have been an easy album for me to throw on my year-end list, and even given that, it still may. I’ve listened to this album many times past the critiquing phase just for the enjoyment of it. It is well worth your time and hard-earned or ill-begotten dollars. Now to see them live… (Ethan)