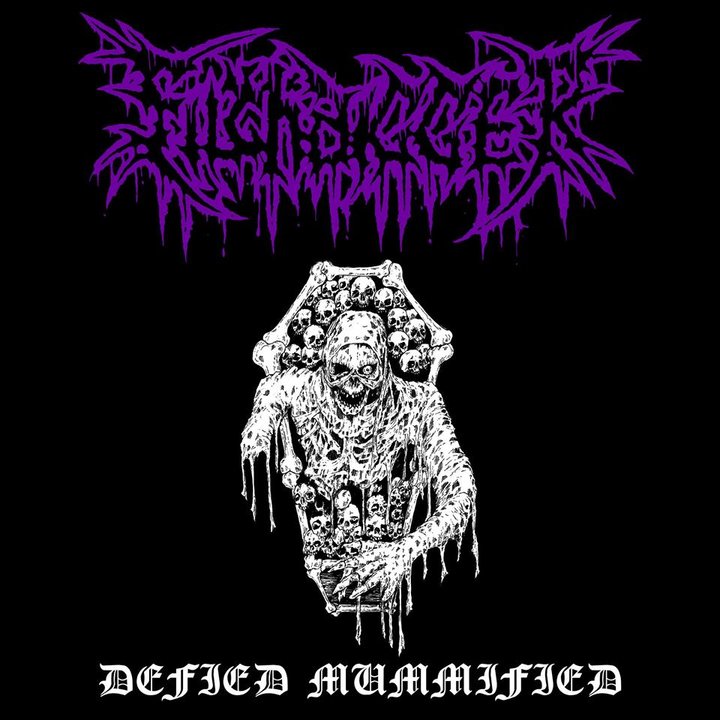 Norwegian heavyweights Filthdigger return to bless our ears with this, their first ever EP (After a heap of demos, and 2016’s full length “Damned by the Living Dead), and what an absolutely awesome effort it is! Admittedly, four of the songs are bonus tracks taken from their imaginatively titled “Demo 4”, so you get three new ones plus the four demo ones, which if you do your math should end up somewhere around the seven number if you are not a complete knobhead.

Yep, Seven songs, clocking in at around the half hour mark of complete and utter madness, as you will no doubt attest to after your first playthrough! Pretty much gonna come straight out and say that this stuff is, at least to these old ears, very much along the lines of Entombed around their “Hollowman” EP, “Wolverine Blues” stage, of which I am quite fond of to this very day. Sure a lot of the purists didn’t like it, and to them I say go fuck yourself, because it was as heavy as a lead bag filled with concrete trucks and B-52 bombers and always will be.

Having said that, Filthdigger certainly do have their own style, tending to be a lot more on the grittier side of things than our aforementioned idols. The bit that made me make the reference more or less apart from the similarities that could be drawn in guitar sound is the singer. Violator is his name, yep, that’s him, and by the sounds of him he has more than likely violated his own vocal chords more than once, and probably many other things, but I’ll leave the rest to your imagination. He has that same kind of ‘demented as bat-shit’ delivery that alternates between the guttural to the stark raving lunatic kind of thing, and it is a joy to behold. Sure as shit the music itself is a bloody marvellous collection of ditties that would probably make your dearly beloved grandmother’s pacemaker shart itself if she gets anywhere near it, but who are we kidding, nobody is gonna come near you if you have this turned up to eleven, trust me on that.

“Defied Mummified” could easily at times be called many a thing, it certainly is Death Metal, has Death ‘n Roll elements, plenty of crusty punk attitude, and is just flat out plain fun to blast as loud as fuck. Destroyer on the drums, for want a better word pretty much destroys all in his path, and Lobotomizor on the six stringed weapon of mass destruction wields his axe like a lumberjack that gets paid per tree and not by the hour, as you will see. Filthdiggers music ranges from the ominous to the flat out ‘fuck you’, and is the perfect thing to just enjoy, no need to overanalyse it, just fucking get into it.

Highlights? “Evil Witch (Of Hell)”, because not only is she evil, she also comes from hell, so that must make her double evil or somesuch. An absolute belter of a tune, “The Living Dead” has Violator at his finest peak of sheer lunacy. Trying to sing along to this one may leave you a little hoarse (no, I don’t mean a pony so don’t get excited), and reassures you that more than anyone in the world, his vocal cords must hate him more than anything. But at the end of the day, the whole fucking thing is just a bundle of fuck yeah to me.

I dig it, you will also dig it, it’s filthy, and highly digable….(The Great Mackintosh)