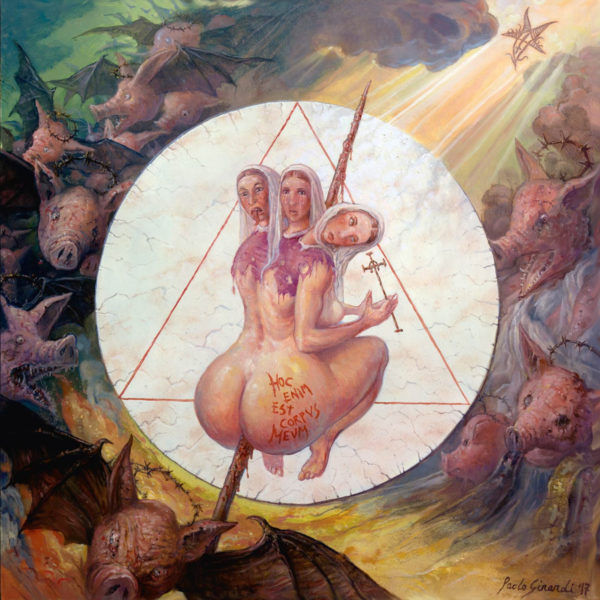 Filii Nigrantium Infernalium. Long name, long band history, long Heavy Metal tradition. These Portuguese pioneers are well known for their traditional Black Thrash Heavy Metal, a mix of early days when all these genres where bounded together fluently. Spitting fire and poison in their native language, the vocals are killer and versatile and in a very vitriolic manner alternating between those kind of vocals and Rob Halford like singing (which is awesome I tell you). The music speaks for itself. Motörhead like riffing, Thrash/Speed metal galore, Bathory blackness, Judas Priest heavy melodies, punk, skank, blast beats, everything alternating and flowing easily through the speakers and all is well produced without being too modern. The band isn`t shy to use acoustic guitars for an instrumental as counterpart to the classic metal skin. You can hear that this band is playing since 3 decades and they didn`t lose their power at all and Paolo Girardi did some blasphemous art for this release which makes justice to this traditional band. Although this marks their only 3rd album in the long band history, it`s better than most early releases done by other bands with such a long history. Is it something ground-breaking? Of course not. Is it worth a listen then? Yes, If you like the early extreme metal mix from the 80s and aren`t afraid of a dose of Heavy Metal (ask Deceased about this), then this thing is for you for sure. It is a nice versatile album, which only time will tell If it`s going to be a cult/classic album. But it certainly is a great listen with tons of grooves…even AC/DC seems to be  good to mention here. Hostia, yeeeaahhhh. (DPF)