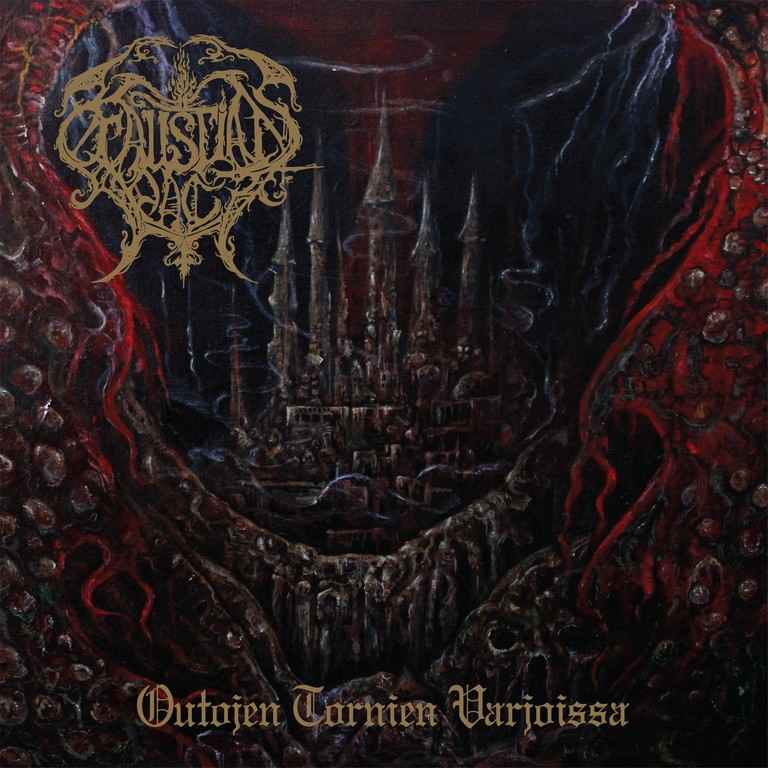 Nostalgia is a double sided sword. On one side is remembers of old glory days, of past things that touched the protagonists heart, even the coldest ones, and on the other it has a negative touch of non progression, non evolution, always looking back. Well, both sides have got their justice, both are needed. In terms of music, to conclude this introduction, it’s hard to do something really new in the  music landscape, that often the artist goes back to already well known formulas that speak to the listeners who still want to be thrown back to the golden days. It may be safe, it may be boring to some, but If well executed and thought out, it can be a more than pleasant experience, or even stellar.

Faustian Pact probably made it. “Outojen Tornien Varjoissa” is pure 90’s Black Metal. The artwork itself should receive praise (art by Octus), showing a dreamy landscape with a castle in the middle and some blood covered rocks with skulls and other stuff (maybe it shows a female body part, a gateway, use your imagination).

The Black Metal of Faustian Pact is melodic, with a Grieghallen like production that already helps to create the nostalgic and cold atmosphere of said period. The debut album (prior to this 3 demos were released between 2008-2010) was recorded during 2017-2019 and could be a reason why everything is so elaborated, thought out with many layers and ideas. The songs have tons of melodies that remain stuck in the head. Synthesizers help to create otherworldly ambience and the vocals are changing from high pitched screechs to clean singing or narrating vocal phrases (Acherontas for example). Drums and bass to the necessary job to keep all together and enough interesting.

Fans of Empreror, Acherontas, Limbonic Art and the likes, this is for you. Strong! (DPF)