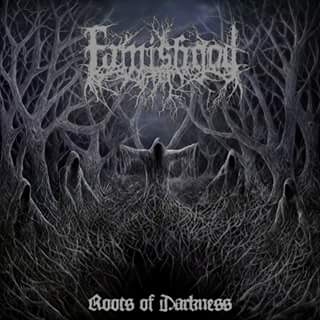 The first album “Devourers of Light” was slow Doom/Death accompanied with ultra-low vocals. If I say Dave Rotten (Avulsed, Putrevore among others) abuses the microphone within this god forsaken project, you probably aren’t that surprised anymore when it comes to vocals. When talking about the music, there aren’t many changes between the two releases. As said, still slow Doom/Death in the vein of Evoken, although “Devourers of Light” was less accessible. “Roots of Darkness” is less sinister and pure darkness as it has a more Doom vibe in it. More Doom melodies. Don’t get me wrong, it’s still dark…but not pitch-black dark. It is almost like Pako Deimler (the “all instruments” one within Famishgod) made more effort in writing the songs. Also the drums sounds less “programmed” than on the debut. In the end, I was quite surprised with “Roots of Darkness”. Certainly give it a listen if you’re into Doom/Death. (Ricardo)