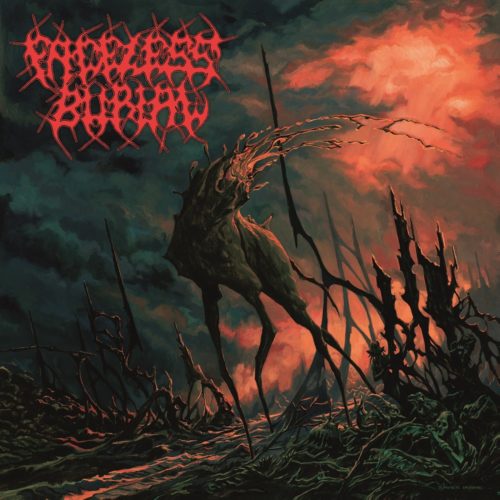 Grotesque Miscreation was already released in September 2017 independently but in January 2018 this will be available in a cd format, so not only people who had the chance to purchase one of the limited vinyl versions will have the opportunity to add this records in its collection. This band consists out of a trio musicians from Australia and they create music in the OSDM-style. Another band that will slip away in the already massive pool of ‘new’ bands that want to revive the past you say? Nope, guess again, cause what this trio has produced in their home at Melbourne is as rot and nasty as hell! The distortion these  guys put into their sound is mind-blowing, the guitar riffs and drum pounding just breath the old days and the vocals sound so guttural that you truly feel the filth filling your body. And it’s not that these guys just copy whatsoever, it all has its own twist and vibe. The intro opens in a calm way, but when the drum combo opens track “Seeping Aberrational Fissures” the devil himself invites you to come over and play. The strings are being molested by Füj and the tempo of execution is immense…next up is another killer titled “Malignant Excavation” that sound harsh and intense.  Also title track “Grotesque Miscreation” is sublime, just listen to the riff inserted in this one and take a bow! There are no fillers on this record, only old school supremacy is what you’ll hear. These boys made a splendid album, and any old school death metal fan must taste this superb dish. Stand out track in my opinion: Excoriate!!!!! What a bomb! Now hush my children and go discover Faceless Burial. (Fredde)