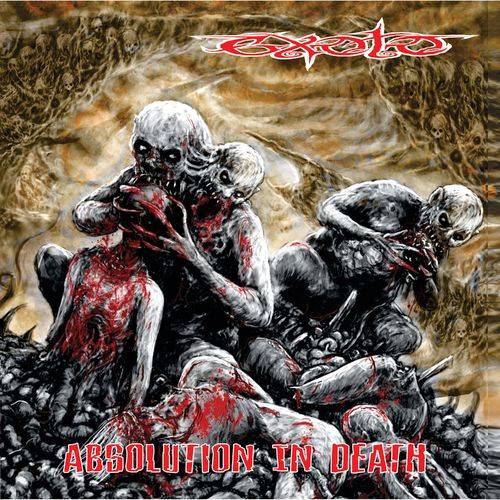 Thirty years is a long time in the game we call Metal; is it not. Belgian legends Exoto have been doing the hard yards for this long, some of you wouldn’t have even been born when they started, and a lot of bands have come and gone since, thousands of them. So why keep plugging away for this long at all? It’s all about the passion. And boy oh boy do these guys have that in spades.

Recently signing to Dead By Dawn Records, being the labels second signing to be precise, this bunch of maniacs are putting the ‘D’ back into Death Metal in no uncertain terms. After an almost clean wipe of the slate personnel wise, Vocalist Chris Meynen has pulled together a brilliant line up of others to deliver what should surely be high in the top ten albums of the end of this year without any doubt whatsoever.

This man’s delivery style is that of a fucking madman preaching such utter hate that one can only be transfixed, and the rest of the band are following suit. Track three “Consumed by Insanity” is sheer testament to this, reminiscent at the start of early Possessed for mine, and then it turns into the riff fest of a lifetime. Such tone, such power, twisting and turning as it goes along, and keeping a big fat smile that says ‘fuck yes’ on your face, and this is just the beginning. You think you have them nailed down? You have no Idea. This is song of the year material, but wait, it gets better.

“Liquefy Your Enemies” is the kind of song that makes you want to just do that, this is some seriously mean shit, and so fucking catchy that it won’t leave your pathetic noggin for at least the amount of time it takes you to track down all those you hate, butcher them, take their bodies out into the wilderness, and bury their corpses in an unmarked grave. Again you cannot take this at face value, and all Ed Gein jokes aside, nor should you. Riff upon riff of crisp, nasty hate pile up on you through what can only be described as what my humble self calls the top shelf of Death Metal.

Not one bad song here, the kind of thing that pretty much speaks for itself, and best you listen.

Speaking of humble, if one was as brilliant as to be able to write track six “Absolution in Death”, they could walk away a very happy man (or whatever you choose to identify as). Again, pure dripping hatred delivered by means of guitar, drum, bass, and a man that has been around long enough to know what fucking good Death Metal is, and what we want as fans of the genre.

Kudos to Exoto for staying the course for so long, and kudos to Dead By Dawn Records for picking up such quality. In case you are just scanning this review, that’s a big fucking yes from me. Get amongst it. (The Great Mackintosh)