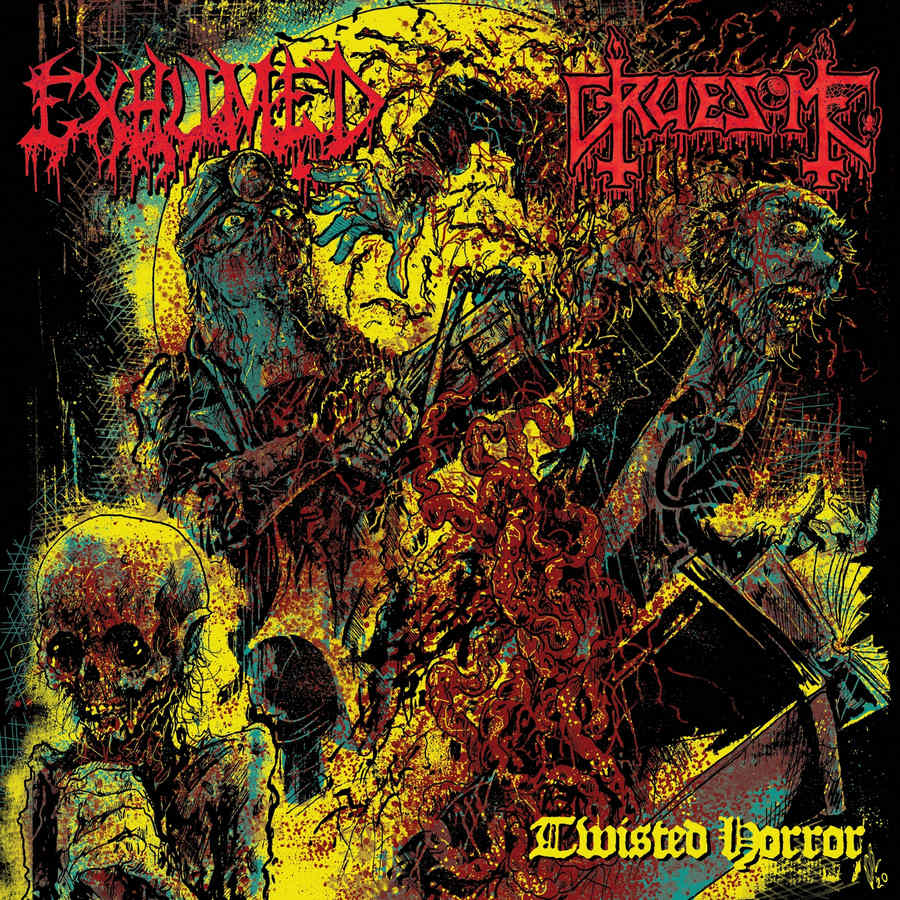 The pandemic has really brought about some much needed free time for musicians coming together to conjure up releases left and right. Can’t complain and even though wasn’t too thrilled about hearing the previous Exhumed release, was quite taken back with “Twisted Horror” split, which should be more like “Matt Harvey and Friends” since he is the vocalist for both groups featured. The artwork on this album is very engaging, the infamous masked figure with a chainsaw slicing through an older gentleman under the radiant full moon.

Five tracks few seconds shy of 20 minutes, this is not a waste of time to listen. Production for both sides is crisp and clear, especially within the guitar work. It really pays homage to earlier Death/Thrash metal bands, no not Entombed or Bolt Thrower, more along the lines of Possessed, Death, and dare I say Dark Angel. Harvey’s vocals forever have this raspy cadence to it, complimented by the gruff growls thrown here and there by bassist Ross Sewage. Tempo has slowed down but the guitar solos are fucking hypnotically hyper speed and you can’t deny how thrilling it sounds, especially on “Dead, Deader, Deadest”, makes your nipples hard just hearing between 2:03-2:36. When you go to the Gruesome side, you can hear “Scream Bloody Gore” ALL over it. You can’t bullshit and say you don’t hear Riefert’s  style come through Gus Rios playing on “Mind of Decay”; of course Harvey’s no Schuldiner but the guitar work and drumming alone comes pretty damn close to sounding like “Zombie Ritual” (with the split having better production).

To be honest I wish this split would have been longer besides an EP time length but to be fair, for being short and sweet, this split was pretty kickass to listen to. (Tori Belle)