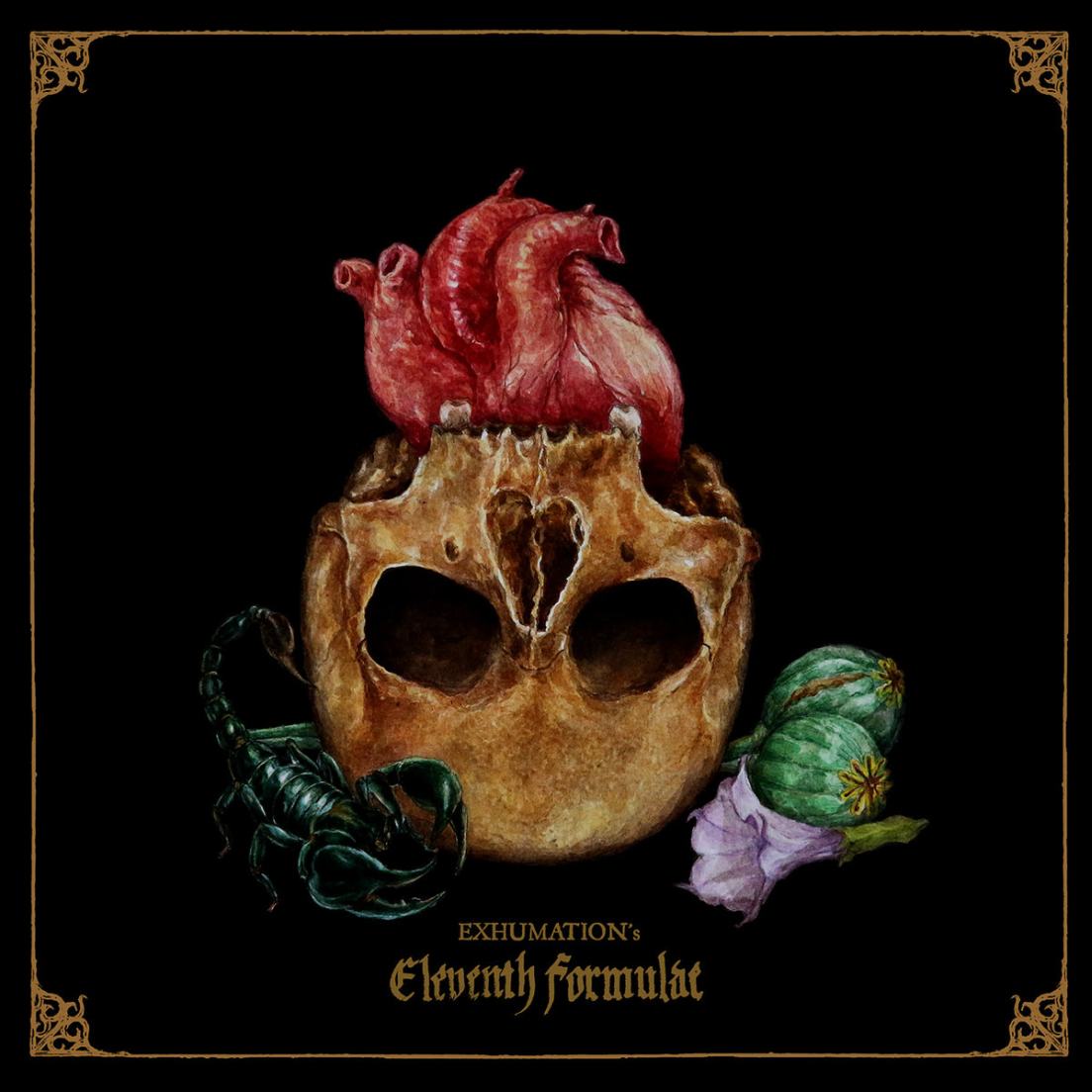 On 2019, a painting discovered on the wall of an Indonesian cave (on Sulawesi island), has been found to be 44,000 years old. The art appears to show a buffalo being hunted by part-human, part-animal creatures holding spears and possibly ropes and now hailed as one of the oldest animal drawing ever found. Grim commandants of Exhumation are also from Indonesia and it would be highly imaginative to think that, their latest opus “Eleventh Formulae” released worldwide, in the parallel course of that discovery. No matter, what other readers may think about this wild connectivity; getting the news of that awestricken discovery and also in the same time, exploring the just released “Eleventh Formulae”, was collided to my mind and like a transported being, I have experienced the whole record while thinking about the baffling mystery of that cave art and wondered, is this a sign exposed by the ancients to remind us their bewildering capability to visit the minds of devoted commandants and subconsciously navigated them to produced this record as a sonic medium to envisage and wonder about such artistries made and left in darkness by mysterious ancient artists eons ago ! Guided by that pulse, I was unconditionally felt a great euphoria to represent this imaginable connectivity of ancient cave artistry and ceremonial death metal essence that embodied by Ghoul (Guitars, Bass) and Bones (Vocals) in the eleven tracks (or formulae !!) of “Eleventh Formulae”, the third full length forged by the Indonesians, since they began journey a decade ago to express their ode to Death and Darkness.

Exhumation style Metal of Death, reminds of elder gods in the great tradition of the early 90s and the demolition of pears. Upholding that tradition, they created each release with spirited essence both in terms of sound and style of play. Likewise, in this record, malevolent riffs played in straight forward approach, with bewildering speed/tempo variation and supported by growls, clear and distorted screams, held together with three engrossing instrumentals. The Indonesians remain true to their line from the first to the last stroke and dig their way through 40 minutes, only interrupted by three interludes. Especially the piano interlude “Formulae II: Ironheart Rapture” conveys the feeling of some dark invocation and with a very ominous aura, each interlude placed very interestingly to create passages for the entire flow of transitions and thus orchestrated a gripping atmosphere all the way around. And, the production is just right in how raw it is yet, it sounds full and massive. Whereas their previous records were more embalmed with chaotic melodies, but make no mistake, this is still raw, evil and dark, and one just can feel the essence the band members are invoking in here: the oblique formulas to experience the bewildering mystery of ancient spirits through artistry and sonic madness – tracks like ”Vicious Ecstasy’, “Arcane Dance”, “Ominous Chants” and “Blood Trails”, will give such everchanging experience upon each exposure. The cover artwork and additional illustrations on this record was done by B. Mors, whom had also previously provided artwork on the “Opus Death” album. And, certainly B. Mors, envisioned a thought-provoking artwork that rightfully encapsulated the essence of this record.

“Eleventh Formulae” also showcases a slew of guest musicians such as S. Iblis of Possession, T. Zama of the now-defunct Sewercide just to name a few and now released to have your self-experience of each eleven formulae on various formats (with 100 copies on Bone Vinyl) by esteemed Pulverised Records. (Randolph Whateley)