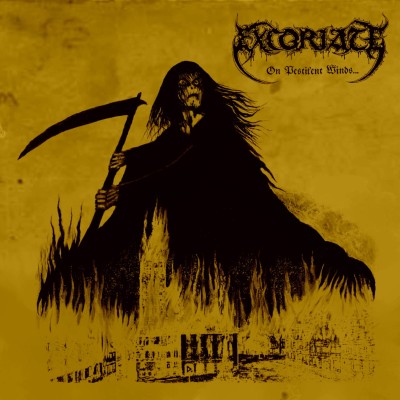 This is heavier than a fart at a funeral. And probably just as putrid as well. Excoriate split up in 2006, but the album has only managed to get released this year. As .to why, one can only guess. It is relatively short at thirty four minutes, but being utter filth in the same furrow as Autopsy, you wouldn’t expect anything more would you? Containing only five original songs, a cover and a short intro, you may intially feel as if you’ve been ripped off, but once you put this in your stereo, at full volume no less, you will curse yourself for not having bought it earlier.

This is brutal death metal summoned from the southernmost bowels of hell, some of the most disgusting (in a good way of course) death metal you will set your ears upon. The production is fairly compressed, creating a dank, extremely clammy atmosphere, but all instruments are allowed to be showcased fairly. The guitar riffing is fairly punkish in feel, very similar to early sepultura, but cleaner, and the vocals a thick gutteral growl with a heavy dose of reverb added. The drums sound like they were recorded in a cave, a very soggy cave. The bass is also fairly brutal galloping along at breakneck speed.

If you prefer death metal in the veins of Autopsy and Sepultura, well what are you waiting for? You’ll find no technical wankery here, no melodic interludes, no ‘bangin’ breakdowns nor any pro-tools production, this is pure rotten organic death metal which is aeons ahead of the soulless tripe being slapped with the term ‘death metal’ in the mainstream these days. (ChrisC)