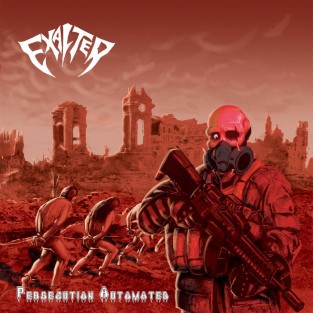 Thrash Metal is a genre that has seen its fair share of evolution since its inception. Bangladesh and Kolkata have always had some of the finest Thrash Metal bands in South Asia. Exalter is no exception. Garnering inspiration from the best, this trio of thrashers have managed to create a sound that sets them apart from others.

Their most recent release “Persecuted Automation” presents Thrash Metal firmly and evidently rooted in early Metallica, Sepultura, Sodom etc. This album employs a more mid-paced approach than these bands did at their best. The highlight of the album however, is the way melodies and grooves have been used in the band’s favour – something a lot of bands miss out on nowadays, while still retaining the in-your-face thrash vibe. The drummer of the band has done a great job on the record perfectly supplementing the fresh song arrangements. As a listener and on more of a personal note than a suggestive one, there are only two things I wish to say. I hoped to hear few more of the tastefully written guitar solos. Another thing I would like to add, however seemingly trivial it is to mention, is that the vocal arrangements in certain places could have been ‘smarter’.

All-in-all, “Persecuted Automation” is a great Thrash Metal record and definitely holds its own among other releases from the very competitive Transcending Obscurity roster. The guys from Exalter can definitely hold their heads high with this release. Thrash on! (Sudarshan)