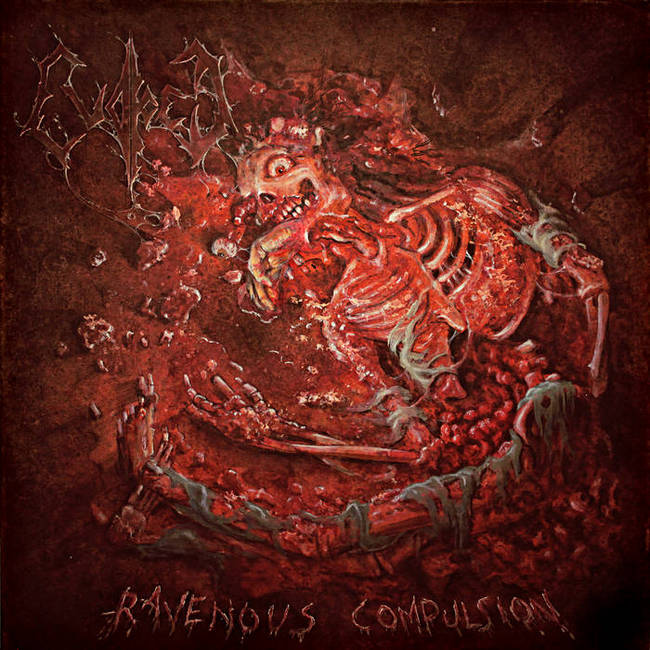 I personally just fucking love albums like this. They make me feel like I am young again, digging through the used bin at Face The Music, and discovering Death Metal for the first time. Back when each and every Death Metal band had it’s own feel and it’s own sound and it all came from the soul. Where every track on an album can have a completely different feel yet still sound like it’s seemlessly the same band. Well, that is exactly what you get here with Evoked’s “Ravenous Compulsion,” old school Death Metal that is done just right. They didn’t focus on trying to sound old school alone, they focused on writing damn good songs that just happen to have that old school flair. It’s just delicious and I could end there.

But I won’t, for Evoked are a rather new and relatively unknown band and that is a damn shame, they need to be known. So here’s a brief bio. Evoked formed in the year 2013 from East Westphalia, Germany and from there set out to do one thing, “spread undiluted death the old (and only) way” (care of FDA Records press release.) Subsequently releasing a demo, ep and split within the first three years before finally gracing us this year, 2019, with their first long player in the form of “Ravenous Compulsion” here. And those talented people responsible for this delightful deathly foray are Bonesaw who takes care of guitar and vocal duties, Artilleratör handling the drums and Accuser slinging the bass, a evil power trio.

Now, I guess I should get onto what Evoked and “Ravenous Compulsion” actually sounds like. That is why we are here right? Well, my friend Ricardo said it best “some great riffs and Martin van Drunen-vocals on this one.” Yep, the vocal comparison fits the band I think of most when listening to this album and that would be the Martin van Durnen era of Pestilence. Right down to the quality of songwriting, performances and all around attitude and atmosphere, it’s old school Death Metal done right, without pretentiousness, it’s just fucking great.

In the end “Ravenous Compulsion” is just what I said it is in the last sentence, just fucking great. It takes you for a ride through early Death Metal while making you feel like you are really there and not just on some nostalgia tour. Evoked are a damn good band with a really damn good new album, you would be doing a disservice to yourself if you didn’t check this one out.  (Ben Schultz)