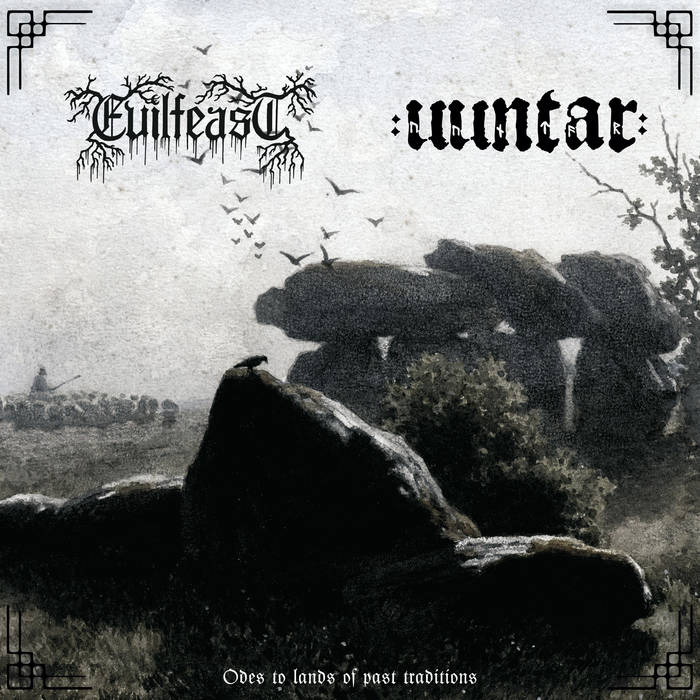 Now this is an interesting split, not only because Evilfeast is featured, but also Uuntar created a decent debut album with “Voorvaderverering” in the Pagan Black Metal style.

Evilfeast from Poland is doing that thing what they do best, creating a mix of dark synth driven Burzum-inspired Atmospheric Black Metal and occasional stellar Ambient passages. On this split GrimSpirit of Evilfeast treats the listener with a 13 minute opus called “A castle enfolded in crimson twilight”, with the Black hymn accompanying the event described in the title. Close your eyes while listening to this track, and you will find yourself in a dark foggy forest with the castle at the horizon. The synths are a bit more melodic than on the other releases, which also has its effect on the riffs as well. Let’s say less Burzumesque, but more Emperor “Wrath of the Tyrant”, old Troll and Dimmu Borgir’s “Stormblåst”.

The other track is a cover of Helgrindr, a French Black Metal band on the Christhunt Productions rooster. You will hear of “n Umbra Refugiis Luminem Exsecrari” which was on their last output, the Von den “Vorfahren herstammend Landen” EP. Needless to say the Evilfeast version is a more than decent homage.

Uuntar, as said they released a fine epic and melodic Pagan Black Metal with “Voorvadervereering” in 2018, but it could be quite possible the two tracks on this split would differ, as the debut album was already created back in 2010. The sound is more clean, less hazy, but the epic part with choirs combined with the repeating riffs and song structures remain. With the tracks “Zon op de Boer” en “De man van Mander” Uuntar created long tracks (more than 10 and 7 minutes) in the 90s Pagan Black Metal with a certain melancholy underneath it. Like with “Voorvadervereering” the Polish scene, with Graveland in front, has the most similarities with Uuntar’s work.

If you are a fan of Atmospheric Black Metal as well as Pagan Black Metal of the 90s, you will have a nice split in your hands with “Odes to Lands of Past Traditions”. (Ricardo)