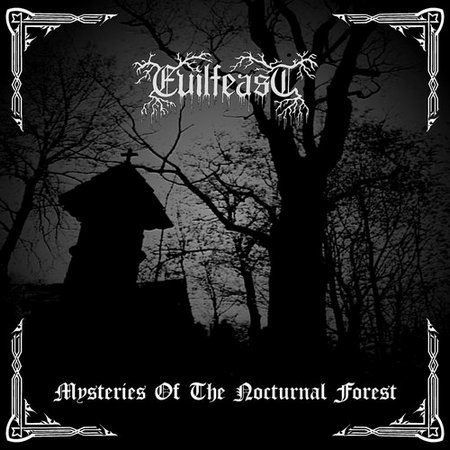 For the ones who are yearning for the atmospheric yet powerful sound of the Nordic mid-1990s mixed with ambient parts, you have to check out Evilfeast and this album in particular. “Mysteries of the Nocturnal Forest” is the debut album of this Polish one-man band and released by Old Legend Productions back in 2004. It now got re-released by several labels and several formats, even you cassette adepts can enjoy it on your Sony Walkman.

As said, despite being for Poland who have a rich Black Metal history as well with old Behemoth, Graveland and Christ Agony, this is far more Nordic.If you…and I will just name a couple of albums…pick Covenant’s “In Times Before the Light”, Dimmu Borgir’s “Stormblåst” along with Burzum’s “Hvis lyset tar oss” and “Filosofem” then you will have this piece of darkness with the production that just fits. The icy dark atmospheric Black Metal with the ambient-like keyboard parts are very well written and songs like “Immerse Into Cold Mist” and “Thy Woods are Sacred” are just top-notch in my ears. The speed differs from the well-known fast Nordic kind as well as atmospheric mid-tempo riffs like on “Descending Winds of Holocaust”.